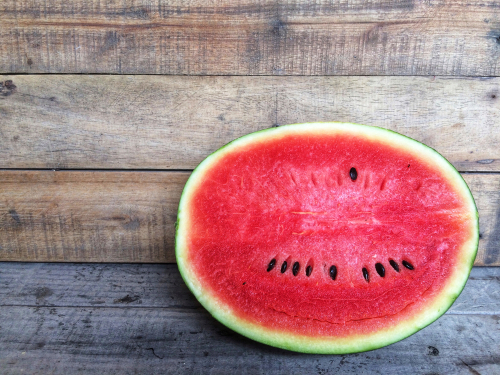 The Hub News Staffhttps://thehub.news
Curators and highlighters of news and accomplishments from the Global Majority. From tech to books, wellness to money, throughout the diaspora we are bringing content that is both unique and focused on showing the world our best.
Prev1 of 4Next
Use your ← → (arrow) keys to browse

Watermelon is perhaps one of the most perfect fruits on earth. It is loaded with antioxidants. It has the highest levels of lycopene (more than raw tomatoes), which is an antioxidant that helps keep your heart healthy and prevents cancer. Watermelon is also rich in Vitamin B, which provides energy as well as electrolytes, sodium and potassium, which is probably why it was such a popular fruit on plantations during slavery. Not only is it easy to grow, but it provides hydration (91.5% water) and fuel.

Plus, it’s an excellent source of the electrolytes, sodium and potassium you need to help the body run strong. Watermelon is also rich in Vitamin B, which is necessary for energy production.

But many black people won’t eat watermelon because of the negative stigma attached to it. It was said that even Malcolm X refused to eat watermelon. The roots of racism regarding the watermelon started with the abolition of slavery. The watermelon was central in many post-slavery celebrations for the newly freed and it was a source of self-sufficiency because it was easy to grow and allowed for many formerly enslaved to build an economy around the fruit. It became a symbol of freedom, which many whites found offensive.

During slavery, the watermelon was a source of hydration and helped the enslaved people recover but it was also a source of ridicule as it was also associated with laziness and dirtiness (it is a messy fruit to eat without utensils).

D.W. Griffith used his film Birth of a Nation to further negative and dangerous stereotype of blacks, making the newly freed to be child-like, uncouth, dirty people who would leave chicken bones and watermelon seeds on the floor of Congress. These images were bolstered by advertisements and the media.