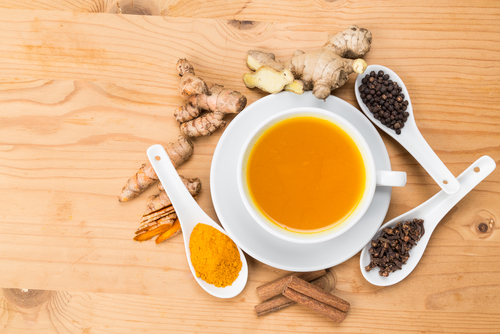 I had never felt nausea as much as I did through my last year of college. Through assignments, grad applications, new jobs, a constant uneasiness crept up my stomach and settled in my throat, making it uncomfortable to even talk or drink anything for hours.

Taking aspirin was a slippery slope. I didn’t want to get addicted to the fleeting relief aspirin provides. But I did. When the nausea came back, it was with a vengeance. I was riding the subway in New York City and the combination of funk, stale air and street gyros was just too much. I nearly passed out. So, I went to the one person who always has the answers—my great aunt.

She recommended ginger and black pepper tea. It is neither delicious nor aromatic. But it works!

Black pepper tea is interestingly diasporic. It is an Ayurvedic medicine that is 5,000 years old and has been used as a natural remedy by native peoples in India, treating common illness before the consumerism of colonialism dictated what is “advanced” and “primitive” medicine.

Like remedies from Africa and Asia before colonialism, Ayurvedic medicine had been disclaimed by European doctors who believed that their technology was more advanced because they were, well, European. Like many Indian practices, Ayurvedic medicine came to the West Indies with the Transatlantic Slave Trade. Through Indian servants and merchants (and slaves) on European ships, slaves put their own African identity on these Indian recipes.

Enslaved people with African heritage added sugarcane and ginger to the tea. With this, black pepper tea became ginger and black pepper tea—a healing mix of Indian and African medicine.

Boil water with a teaspoon of black pepper either as powder or in cloves. (I recommend doing this in a pot, or you have to scrub your teapot extra hard afterward).

Add a teaspoon of chopped fresh ginger or ginger powder.

Strain if you used cloves of black pepper or chopped ginger.

Add pure cane sugar and lemon to taste. (I highly recommend this step).

This tea opens sinuses, helps digestion and eases nausea. The taste isn’t the best, but it’s a good alternative to multiple aspirins and pills with mystery ingredients and it’s completely customizable. A few cups can easily tend to a rough flu or a cold. For motion sickness, add a pinch of mint. Don’t add the black pepper if you are pregnant, just use ginger for morning sickness.