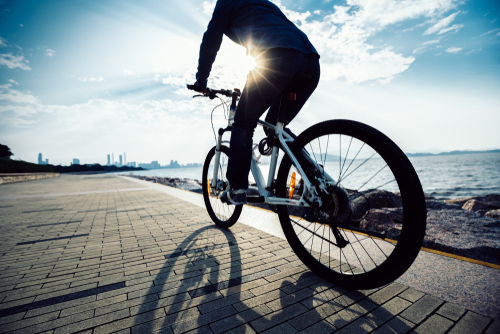 I rode my bike to the post office and as I was leaving, I was waved down by this elderly man. I made a U-turn and came back.

“Can you help me across the street,” he asked.

He had walked over from the senior citizen’s building and couldn’t make it back. I got off my bike and walked him across the street. We chatted a bit. I learned his name was Bill and he was 82 years old. He was dapper. He had on this nice summer shirt and tie, summer slacks and a belt. While he was nattily dressed, I could see that his clothes were soiled.

This pissed me off. Clearly this was a man who cared about his appearance, but he was not capable of perhaps washing his own clothes and the people running the facility didn’t seem to care. He was struggling just to walk. I can’t imagine what it took for him to put on these clothes and cross the street.  It was a great feat.

As I walked him across to the handicap ramp, I thought to myself: “I never want to be at anyone’s mercy like this.”

I hopped back on my bike and rode home thinking about Bill. At 82, he wasn’t very mobile nor flexible and I wondered how working out would service him. I thought about the great Cicely Tyson, who in her 90s does push-ups everyday. I thought of Ernestine Shepherd, who started exercising at 56 years old. She is now 81, a year younger than Bill. She can not only run across the street, but also sprint around the block better than I can.

I thought of 102-year-old Ida Keeling and I know that movement and exercise are the keys to longevity, sustained health and independence.

I have been threatening to add Bikram to my routine but each time I set out, I have an excuse for not going. I’m going this weekend. I will continue to write about my journey. While I’m down another pound today, I haven’t reached my 20-pound goal yet.

More than those 20 pounds, however, I want my future to look more like Ms. Shepherd and Ms. Keeling than Mr. Bill.

Working out everyday, I have been sweating more (that, and it has been 90-degrees a lot). I'm doing a more laundry over these last...
Read more
30-Day Challenge

I have a friend who has a dog, a miniature pinscher. The normal lifespan for this breed is 15 years. This dog will be...
Read more