The War on Cancer! 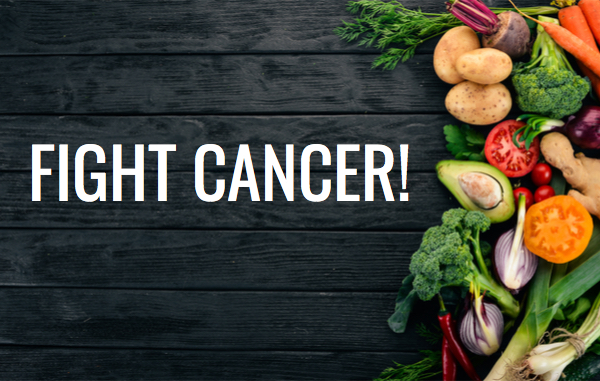 Over the last nine years I’ve had several clients who were diagnosed with breast cancer and are in recovery. Two are taking anti-estrogen chemo drugs so the cancer will not come back. They have told me those drugs cause loss of appetite, hair loss, irritable digestion and even early menopause, a sign of accelerated aging.

I encouraged both clients to make dietary changes by including more fiber-rich foods, which were not suggested by their doctors. Each have reported significant improvements in energy level and appetite. One woman took it a step further and is eating raw salads (two per day), lots of veggies and she’s eliminated all meat products (including dairy).

She’s also stopped taking her chemo drugs (I didn’t advise this but she said it was making her feel sick). After she stopped taking it, she said that within two days her menstrual flow returned. She also lost weight and emotionally she feels unstoppable.

I’m convinced that the war against cancer starts in the kitchen. And it starts way before it can be diagnosed.

If your eating style is based on processed foods and meat products, they will spur the growth of small, undetectable tumors. For instance, if you have a breast cancer tumor the size of an eraser on a pencil, it’s been growing undetected for approximately 10 years.

Eating fresh produce must be your first line of defense in the war against cancer. Drugs cannot fight the battle alone (and in many cases are ineffective). They only mask the problem and help you manage it (and many have horrible side effects).

We all have noxious invaders in our bodies, including cancerous cells, due to the environment, stress, lack of exercise and dangerous food choices. We must introduce fresh produce into our bodies to combat those invaders.  The ammunition your immune systems needs is anti-oxidants from minerals and vitamins. The best source for that ammunition is fresh fruits and vegetables, mostly found in the first aisle of the grocery store.

The bigger challenge is socially accepting an abundance of fresh produce into our lifestyles.  Since no one eats purely for nutritive value, we tend to outsource food preparation to fancy restaurants and fast food establishments.  When that’s done excessively, you lose control and you can never be sure of what you’re putting into your body.

The rise is metabolic diseases proves we’re suffering the consequences of doing that. Therefore, take immediate action and cook at home more often. I recommend at least 80% of your food should be prepared at home. The food you prepare at home should be primarily fresh produce, at least 75%.

The closer you get to 100% fresh produce, the more powerful you will become.  By far, it’s the best cancer defense money can buy.

I started my journey toward a plant-based lifestyle 31 years. It changed my life. I wrote a book about how to eat,...
Read more
Healthy

I was inspired by the television program, "Black Women Own The Conversation," discussing beauty. The audience of 100 women from all walks of life held...
Read more
Healthy

How Much Exercise is Enough?

The most important objective with exercise is to enjoy the process as much as possible regardless of length.  Exercise should relieve stress, not compound...
Read more
- Advertisement -