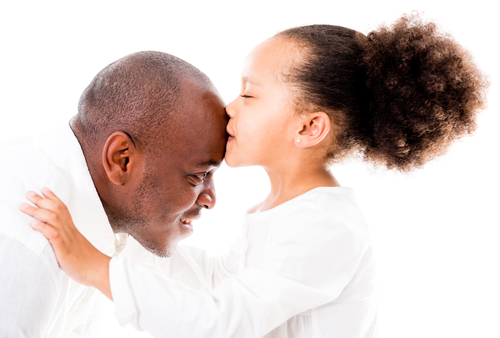 Single-parent families have been under scrutiny and research for the past few decades.  Many researchers present the view that two-parent families are a healthier stepping stone for child’s development when compared to a single-parent or blended family.

Indeed, recent literature notes the importance of the father’s role and how it can have both positive and negative impacts on children. The research focuses on different family structures, because an increasing number of children are raised in single-parent homes, particularly in father-absent homes especially in African American and Mexican American families (Krieder & Fields, 2005).

More than 25 million American children (or 33.5 percent of children in the U.S.) live without their biological fathers (Krieder & Fields, 2005). Based on the view regarding how essential a father is to a child’s life, one might wonder what it is about a father’s absence that leads to poorer childhood outcomes. Several theories have been put forth; the three most popular being economic deprivation, poor parenting and lack of social support (Lamb, 2004)

Most research results indicate numerous undesirable outcomes for children who are raised apart from their biological father. For example, in heterosexual families, fatherlessness has been reported to lead to more emotional disturbances, school dropouts, drug addiction, earlier sexual behavior, academic difficulties, lower self-esteem and an increased risk of incarceration (Horn, 2002). However, little research has been conducted to identify biological implications on a child’s brain due to an absent father.

Neurologists are now finding that growing up without a father actually changes the brain. Braun’s 2006 study focused on degus rodents, which are generally raised by both mother and father, in an attempt to understand the effects of paternal absence on the brain.

In the study, Braun raised eight pups (half raised with a father and mother and half raised only with their mother) where the father was removed one day after birth.  After 21 days the degus offspring were examined and differences were found in brain anatomy and behaviors of the rodents.

The researchers utilized three techniques to investigate the neural anatomy of the degus offspring; light microscopy, electron microscopy, and weighing the brain. Neurons were examined using an Olympus BH-2 microscope with a final magnification of X1000. The results found differences in the dendrites between groups.

Dendrites, which conduct and receive electrical signals other nerves in the body, have a structure called dendritic spines which are responsible for contact between other neurons.  Braun found at 21 days of paternal absence, the fatherless group had less dense dendritic spines compared to animals raised by both parents (however they caught up after 90 days).

There were also neural difference found in the amygdala, which is related to emotional response and fear. There were also differences in the orbitofrontal cortex (OFC), which is responsible for decision making.  Compared to pups raised by both mother and father, the paternally deprived group had fewer dendritic spines in the OFC and exhibit enlarged dendritic connections in the amygdala.

The paternally deprived degus offspring also exhibited behavior differences compared to the opposite group.  These rodents showed more aggressive and impulsive behaviors. Researchers observed this in their play, as they engaged in fighting behaviors and aggressive interactions. They also exhibited more anxious behavior and less spending time or engaging with novel rodents who were place in their cage.

Although this information gives significant insight into the dynamics of family and its effects on the brain, studies like this should not be directly associated with human beings. The results should be understood carefully as the human brain differs from the rodents in especially in the OFC where decisions are made. The social interactions and interpersonal phenomena differ in incredible ways across various aspects. However, it should be noted that paternal absence has an influence on an offspring’s brain and behavior. To conclude specific structures of a human’s brain might be misleading and prove to be untrue.

However, in humans there have been specific behaviors noted in individuals who were raised by a single mother.  There are many negative outcomes that have been found to correlate with the absence of fathers. Popenoe (2000) showed juvenile violent crime had increased six fold from 16,000 arrests in 1960 to 96,000 in 1992.  Eating disorders and rates of depression have soared among adolescent girls. He also explained that 60 percent of America’s rapist, 72 percent of adolescent murders and 70 percent of long-term prison inmates all came from fatherless homes.

Alongside, Hymowitz (2007) looked at African American and Mexican American individuals and suggested children of fatherless homes are more likely to suffer emotional, behavior, and psychological problems and children from fatherless homes are five times more likely to suffer from poverty.  He showed the risk of neglect doubles, and the probability of accidents and injuries triples.  There is also an increased risk of developing antisocial behaviors, engaging in premarital sex, and substance abuse.

Through a meta-analysis of research on fatherlessness, one can conclude that the father’s role is an important one and their functions serve multiple purposes. The need for a father to be present and provided many forms of stimulation is a key component, accompanied with maternal nurturing, in children’s development.

I started my journey toward a plant-based lifestyle 31 years. It changed my life. I wrote a book about how to eat,...
Read more
Healthy

I was inspired by the television program, "Black Women Own The Conversation," discussing beauty. The audience of 100 women from all walks of life held...
Read more
Healthy

How Much Exercise is Enough?

The most important objective with exercise is to enjoy the process as much as possible regardless of length.  Exercise should relieve stress, not compound...
Read more
- Advertisement -