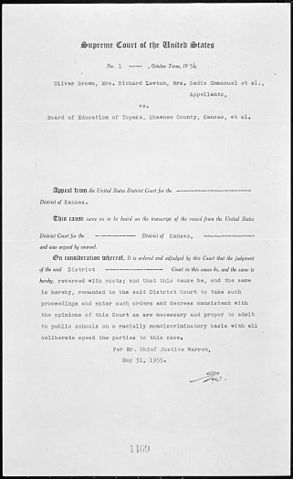 What started out as an unusual hangout led to something extraordinary! This week, Coach Cass (@inspiremany) speaks with Media Personality, Erica Cobb...
Read more
Injustice

Brown was not just a single case, but rather it was a coordinated group consisting of five lawsuits against school districts in Kansas, South Carolina, Delaware, Virginia and the District of Columbia. However, in one of the cases, a plaintiff named Oliver Brown filed a class-action suit against the Board of Education of Topeka, Kansas in 1951 after his daughter was denied entrance to Topeka’s all-white elementary schools. Brown’s case went before the U.S. District Court in Kansas but ended with the upholding of the “separate but equal” doctrine.

When Brown’s case and four other cases related to school segregation made its way to the Supreme Court in 1952, all were combined into a single case under the name Brown v. Board of Education of Topeka.

At the time, Thurgood Marshall was the head of the NAACP Legal Defense and Educational Fund and served as chief attorney for the plaintiffs. Marshall recruited some of the nation’s best attorneys such as Robert Carter and Constance Baker Motley to assist in litigating the case.

The team of attorneys were tasked with challenging the status quo upheld by the Supreme Court in the 1896 Plessy v. Ferguson ruling that deemed racially segregated public facilities legal, as long as the facilities for both races were equal.

Initially, it appeared as though the Supreme Court would uphold the verdict, but the presiding Chief Justice died and President Dwight D. Eisenhower replaced him with Earl Warren. The Warren court decided on a unanimous verdict against school segregation. In his address, Warren referred to segregated schools as  “inherently unequal,” ultimately ruling in favor of the plaintiffs.

The Brown v. Board of Education case helped to start a movement and set the path for other desegregation laws to be passed. Since the case, there was the passing of the Civil Rights Act in 1964, the Voting Rights Act in 1965 and the Fair Housing Act in 1968. The ruling was further upheld in Runyon v. McCrary when the Supreme Court also ruled that private schools denying admission to students based on race violates federal law.

Venezuelan President Nicolás Maduro's only son is campaigning for a seat in Venezuela's congress. According to The Washington Post,...
Read more
Healthy

The U.K has become the first country to begin rolling out Pfizer's COVID-19 vaccine. The vaccine will be rolled...
Read more