This Day in History, July 31st 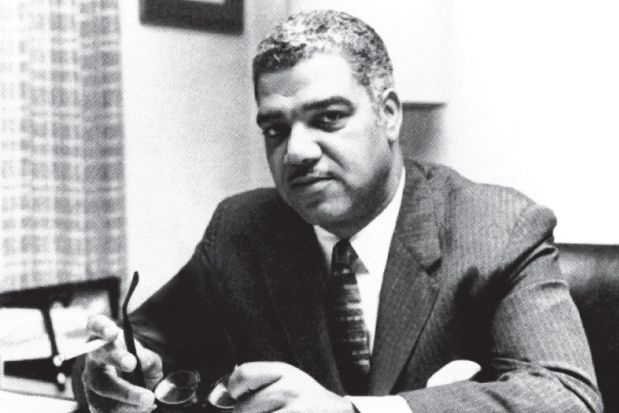 Civil rights leader and former head of the National Urban League, Whitney M. Young Jr., was born on July 31, 1921, in Lincoln Ridge, Kentucky. Young was responsible for greatly expanding the size of the National Urban League and overseeing the racial integration of corporate work offices. He encouraged racial integration and economic empowerment in the African-American community.

Young grew up in a family of educators. His mother was a teacher and his father was the principal of Lincoln Institute, a boarding school for African-American students. Young attended Lincoln Institute and graduated from Kentucky State Industrial College. He became a teacher before serving in World War II. After his return from serving overseas, Young attended the University of Minnesota and received a master’s degree in social work.

In 1947, Young began as director of industrial relations for the Urban League at St. Paul, Minn. He then moved on to Omaha, Neb., where he served as executive secretary from 1950 to 1954. Young helped to move the organization to the forefront of the civil rights movement. His efforts led to the organization placing many African Americans in positions that were previously white-only.

Following his role as executive secretary, Young took a position as dean of Atlanta University’s School of Social Work in 1954. He remained active in the Civil Rights Movement and was head of the state branch of the NAACP. Young was one of the influential leaders during the 1963 March on Washington for Jobs and Freedom. The planners of the march used the National Urban League headquarters in New York for their meetings and Young served as one of the featured speakers. He was one of the “Big Six” national civil rights leaders to announce their coalition.

The civil rights leader soon began to advocate for a federal assistance program that would help cities combat poverty. He developed the “Domestic Marshall Plan,” a 10-point domestic strategy for combating poverty and closing the wealth gap between black and white Americans. The plan was influential to President Johnson’s War on Poverty and it was partially incorporated into legislation. In 1968, the Johnson administration honored Young with the Presidential Medal of Freedom, which is the nation’s highest civilian award.

Young Jr. had been a consultant on racial matters to Presidents John F. Kennedy and Lyndon B. Johnson. He died away on March 11, 1971, at the age of 49, while attending a conference in Lagos, Nigeria.

Born on This Day in 1949, Here Are 5 Things To Know About Jamaica Kincaid Caribbean American writer,...
Read more
- Advertisement -