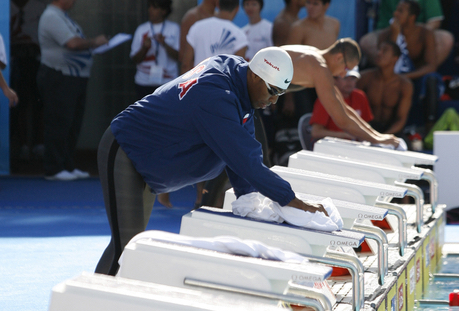 “The stigma of “black people don’t swim,” bothers me,” said Cullen on GMA last week. “I have four medals. I cannot float. It has nothing to do with being able to swim.”

Cullen, born in the Bronx and raised in Irvington, NJ, understands the history and the stigma associated with swimming for The Global Majority in America.

The reason why many don’t know how to swim has its roots in racism. Pools and beaches throughout the country were off limits to blacks during the Jim Crow era. There is even a famous story about a hotel in Las Vegas draining their entire pool because the beautiful Dorothy Dandridge dipped her toe in the water. The incident occurred in 1953, at Hotel Last Frontier where Dandridge, the first black woman to earn a Best Actress Oscar nomination for her role in Carmen Jones, deliberately put her foot in the pool.

Black children drown at a rate three times that of whites, according to the Centers for Disease Control and according to a study by USA Swimming, 70% of black children surveyed said they either have low or no ability to swim.

Last month, nine members of one family drowned when a duck boat capsized on Table Rock Lake in Missouri. In 2016, in St. Petersburg, Florida, three teenage girls drowned in a swamp. And in 2010, six teenagers drowned in Louisiana after a 15-year-old accidentally stepped into deep water in the Red River in Shreveport and panicked. His friends, who rushed in to help, ended up drowning as well.

Cullen Jones—the first black to hold a world record in swimming, who has gold medals in the 4 x 100-metter freestyle relay from the 2008 Olympic Games in Beijing, China, a gold medal in the 4 x 100-meter medley relay from the 2012 Games in London and a silver medal in the 50-meter freestyle from London—also almost drowned at an amusement park when he was 5 years old.

“My inner tube hit the pool at the bottom of the biggest slide in the park and flipped over,” Jones told PEOPLE magazine. “I had never had swim lessons, I didn’t know what to do and I wasn’t strong enough to pull myself out of the water.”

Today he is a crusader for pushing blacks to learn how to swim. Can you swim? Let us know on Twitter with the #WellnessWednesday.