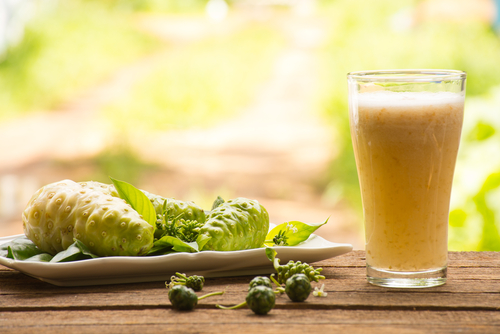 When Dr. Oz introduced the noni fruit on his show with the statement, “One of the goals of the show is to put things that seem exotic or unique on the map,” my skin crawled. He invited a “medicinal hunter” to vouch for the fruit’s health benefits, because it seemed as if something that isn’t part of American knowledge (by the way, noni grows in Hawaii, making it highly American), it must be introduced as an exotic fantasy elixir hunted down by the Indiana Jones of natural medicine.

Noni, which originated in the Caribbean and South Asia, is also known as beach mulberry or cheese fruit and is a cousin to coffee. Noni is bitter, chewy and often foul smelling (a sweaty foot smell that lingers long after cutting it). It is also a well-known ingredient in alternative medicine.

Also called “dog dumpling” in the Caribbean, the fruit itself has been lauded as an antioxidant-rich way to improve heart and digestive health, improve skin and boost immunity, among many other things. Noni juice, it would seem, should be just as healthy and nutritious as the fruit.

But that is not the case.

Noni juice, often blended portions of the fruit strained into a thick liquid, has none of the proven medicinal benefits the fruit. There is no research that shows that the juice of the noni fruit has any health benefit, especially after straining or boiling out the nutrients. In fact, it may be just the opposite.

High levels of potassium in noni juice can lead to issues with the liver and the kidney. Pregnant or breastfeeding women should avoid the juice as it has been known to lead to the loss of pregnancy or miscarriages.

In 2005, World Journal of Gastroenterology reported two cases of liver damage caused by noni juice, and warned doctors that the cases (as isolated as they were) demonstrate how the juice may be potentially dangerous to the liver. The lesser side effects of noni juice include: a foul taste and smell and occasional diarrhea.

As popular as the juice is for alternative medicine—with claims that it treats and prevents cancer, HIV and heart disease—the American Cancer Society and the FDA strongly disagree. Neither
supports noni juice’s packaging or products that make these claims.

Noni plants and its juice, like every natural food, should be taken in moderation. The bottles of the green juice that promote a healthier life with a teaspoon or more a day are not FDA-approved. But then again, a lot of good things are not approved by the FDA.

The plant has been consumed for centuries in Hawaii and Southeast Asia, but there is still much to learn about the fruit and its uses. Do your homework. Consult a physician. And be careful before making noni juice a part of your daily routine.