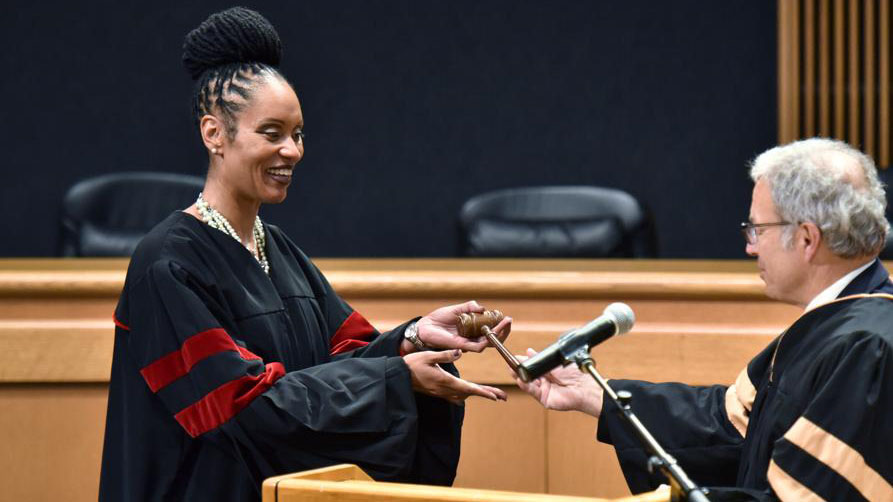 Ronda Colvin-Leary, who became the first black person elected to the Gwinnett State Court in the county’s history in May, was sworn in yesterday. Colvin-Leary has been a member of the Georgia bar since 2001 and was solicitor for the city of Windsor while running her own law practice in Lawrenceville for the last decade.

Her election is significant because it sends a signal of change, that people are paying attention to how these seats impact their lives.

Colvin-Leary’s Gwinnett County State Court handles civil actions, misdemeanors and traffic violations. She told the Atlanta Journal-Constitution that she likes the court’s role in the judicial system because it can address more minor legal issues before they may escalate.

“I love State Court because, for me, I like to think that … if you come to State Court we can try to address it before something else major happens and you wind up in Superior Court for a more serious offense,” Colvin-Leary said.

White men make up 58% of state court judges, while making up less than a third of the population. Less than one-third of state judges are women, and only 20% are people of color. In Texas, for example, where about 40% of the population is Latino, only 5 of the 76 justices who have served on the Texas Supreme Court since 1945 have been Latino. That’s 6.6%.

“This is a wonderful time in the history of Gwinnett County,” said Gwinnett County NAACP Pres. Renita Hamilton Edmonson, of Colvin-Leary ‘s election. “The significance of this event reflects the spirit of diversity, the melting of prejudices and welcomed change.”

Georgia is looking to test this theory in November as Stacey Abrams is poised to become to the first black woman governor in the history of the nation.