Embranquecimento: The ‘Whitening’ of Black Brazilians 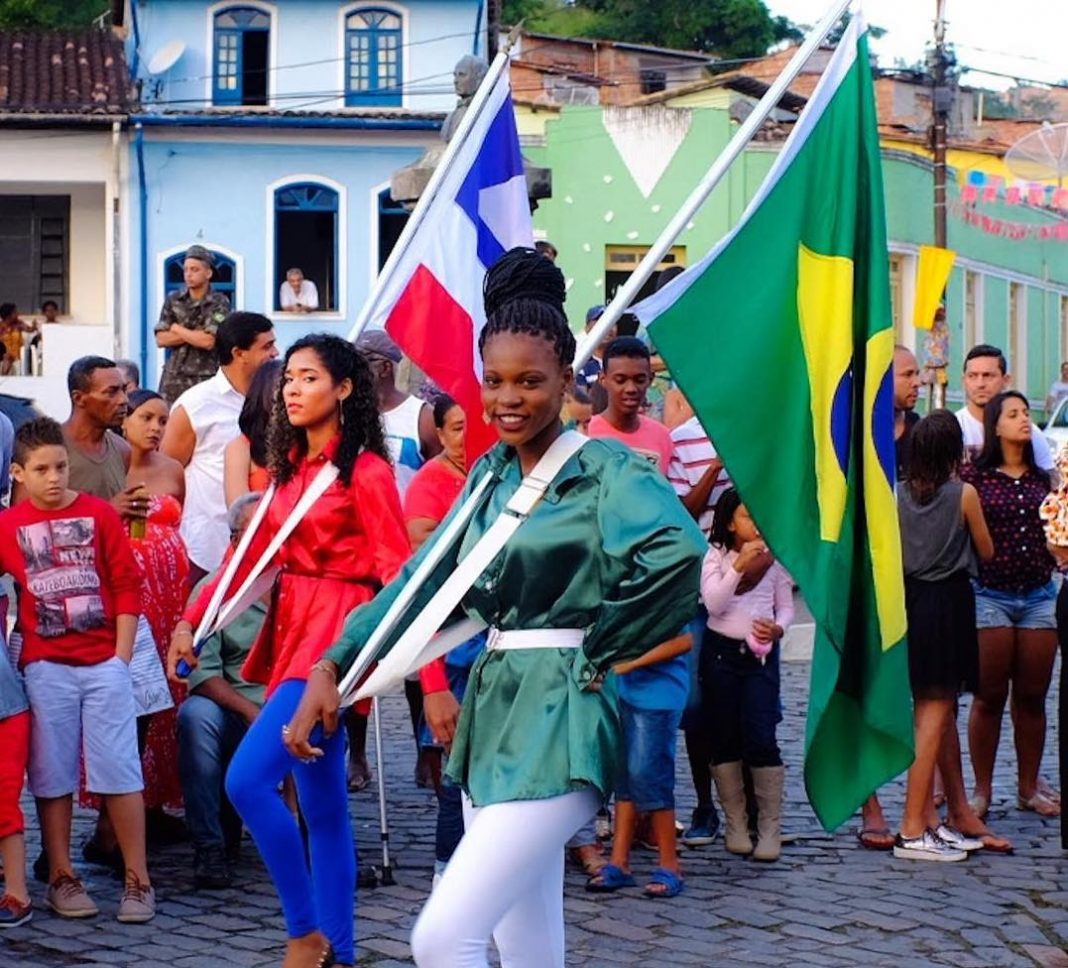 Between the end of June and the first week of July, Brazil celebrates several annual holidays with a host of regional and national festivals.

Sao Joaos (Saint John’s Day) and Bahian Independence are the most notable in the Northeast. There are many public and private rituals during the festival including hosting dinners, masses, lots of parades and several religious processions. I enjoy showing folks in New Orleans video clips of local high school bands parading down brick roads playing Stevie Wonder songs, and they can’t believe it’s not a second line or Mardi Gras parade. But being there, you can see the same joy in young people’s faces.

Having all eyes on them after practicing all year, they have this moment to be Black and loud and strong and graceful. During the festival in historical towns like this one, Cacheora, there are Black high school dancers with dark brown skin who receive valoration from global visitors.

Gay black men, who face violence daily, perform on this day in the street with pride. Providentially, there are moments like the one I captured in the photograph above of two color guards dressed in the Brazilian and the Bahian flag colors. This can be read in ways that help understand the byzantine nature of racial politics in this misunderstood nation.

I entitled the image, “Brazilian History 101” because of the deep narrative embedded in the frame. To be clear, race, colorism and class politics have defined Brazilian social structures since the beginning.

A young dark-skinned one is in the center of this image, proudly displaying the Brazilian flag, matching it with a green satin top, glimmering smile and FRESH braids.

What’s not as apparent is that her position and disposition are in resistance to a centuries-long anti-blackness in a land upheld by Black women. Behind her is a lighter-skinned woman holding the Bahian State flag, a red, white, and blue banner representing the Northeast region who expelled the Portuguese on July 2, 1823. She, however, in this moment is wearing an expression speciously as rouge as her beet red blouse.

The parade is celebrating Bahian independence, which resulted in the final political separation of Brazil from Portuguese colonial rule. But the Bahian flag in this context represents Black and Indigenous culture and history.

Bahian Independence Day is far more popular than Brazilian Independence Day. Northeastern Brazilians (or Nordestinhos) were the first to be colonized by the Portuguese and ultimately the ones who brought about Brazil’s freedom. Independence parades regularly include the procession of large statues called Caboclos, figures of Indigenous warriors slaying large serpents or dragons.  The dragons are representative of imperial powers. The colorful sculptures are surrounded by flowers and fruit on a large chariot which paraders follow, touch and kiss for good luck and blessings.

The Caboclo represents the spirit of the original inhabitants of the land which Nordestinos believe bestowed upon the enslaved, Afro-Indigenous and even poor whites, the will to fight with the ruling white Brazilian government in order to defeat the Portuguese crown.

Carrying the Bahian flag during Bahian independence day is certified flex, so why the wry expression?

The short answer is anti-blackness and colorism. Of course, we don’t know what the young woman was actually thinking at this moment but can indeed serve to illustrate important realities of life in the Black Atlantic.

Black identity in Brazil is historically considered more physically and psychologically diverse than our contemporary experience in the States (although the ‘browning of America’  foretells a convergence in our futures).  There were an estimated 4 million enslaved Africans brought to Brazil. More than any country in the western hemisphere. In other words, ten times the number of slaves brought to the United States. Brazil was the last country to abolish slavery in 1888. Paradoxically, the country has an enduring reputation globally for practicing the social doctrine of racial democracy. This results in groups outside of Latin America believing that Brazilian racial mixture eliminates the diametric concepts of black/white.

This is obviously untrue.

During the first 15 years after independence, the Brazilian government invested lots of money over decades to import white Europeans into the country to whiten the population.

This is illustrated in the painting by Ham’s Redemption (A Redenção de Cam) by the Spanish painter Modesto Brocos in 1895. The painting features a Brazilian family including a Black grandmother, mestiço (mixed-raced) mother with her white child and a white Portuguese father.

The artwork was embraced as an advertisement for whitening ideology.  ‘Embranquecimento’ promised that each generation of the Black genetic line would become “whiter”. For this, the Black grandmother is looking to the heavens and thanking God for making her grandchild white. The father sits in proud, but relaxed domination. The child represents a prosperous future holding a ripe orange in his left hand, while the mother points to her African mother who represents the genetic or cultural past.

Embranquecimento policies were designed to dilute the Black race and “whitening” Brazilian blood. Demographic censuses ignited the social tradition of popular non-preto (Black) and whiter racial categories from chestnut colored to cafe com leite.  These factors defined the framework for Brazilian social/racial hierarchies. While still embracing racial mixing, “White” was superior to “Non-Nhite”, “but ‘White’ was (and continues to be) moderated by a set of moral and cultural attributes even more than skin color.

Namely, anti-blackness in Brazil dictates the idea that any amount of whiteness in your ancestry and especially any traços finos (fine features)— basically perceived White European features (especially a thinner nose or less curly hair) give you access to whiteness as a social currency. Essentially, Brazilians experience an opposite version of the “one drop rule” that defined concepts of race in the United States. Additionally, anti-black violence increases proximity to whiteness. This explains how Brazil’s notoriously murderous state and federal police forces consist largely of ‘Black’ employees. Similarly, Black Brazilian women face femicide at rates 23% higher than white women. As such, racial activities dominate and determine the social conditions of Blacks, who make up the majority of the population.

Of the many theorists who analyze Brazil’s unique racial politics, I want to highlight an Afro Brazilian woman whose research was at risk of being forgotten if not for the efforts of the #citeblackwomen movement. This year, Dr. Christen Smith led a team that translated the work and intellectual legacy of Beatriz Nascimento into English.

“Hence this supposed ideal of the white ego, which is nothing more than a transference—through affect, through desire—between two or more individuals.Whitening was just an ideology captured by the apparatus of the State, institutions and groups of people committed to the maintenance of denomination. The ego does not accept limits. Can the ego not desire anything, not be anything? What is there that is pathological in desiring to be black, white, yellow, man,woman, child, gay, asexual …?

… Negritude, therefore, is not hegemonic in either space or time. It is not inside ToBe, neither is it in the word black. Its realisation takes place on many dynamic levels. In dealing with Black Brazilians, there is also a becoming Amerindian and many inter-lacings in an endless process of serialisa-tion…”

Thanks to the work of Nascimento and other unsung Black Brazilian feminists, the  “maintenance of denomination” is upended in many regards. In 2010, for the first time since the first census in Brazil in 1872, the self-declared preto (Black) and pardo (mixed-race) population surpassed brancos (whites).

Returning to the color guards, seven years after this census, a new generation of Brazilians are able to witness a dark-skinned young woman, with a Black hairstyle representing the country by guarding its national colors. Anecdotally, I would imagine that their teacher was among the brief wave of Black Brazilians who transgressed the social hierarchy by entering college during the post-dictatorship, democratic governments of Lula Da Silva and Dilma Rouseff. Racial quota programs under their administrations in coordination with the Brazilian Black Movement were responsible for an over 25% increase of Afro Brazilians in college. Civil service jobs including public school teaching positions were also guaranteed for Black workers.

With every action, there is a reaction. While she was waving this flag, a Brazilian right-wing populust movement was plotting the soft coup of the first woman president, Dilma Rouseff. This successful coup would eventually result in the 2018 presidency of Jair Bolsonoro “The Trump of the Tropics”.  The far-right politician immediately began dismantling every area of social programming while igniting a white supremsist ideological movement among his growing supporters using rhetoric often cribbed from the MAGA movement. The Brazilian flag is now the indisputable symbol of the white populist movement in Brazil, equally as emblematic of the global extreme-right movement as the star spangled banner.