Don’t Be So Salty! 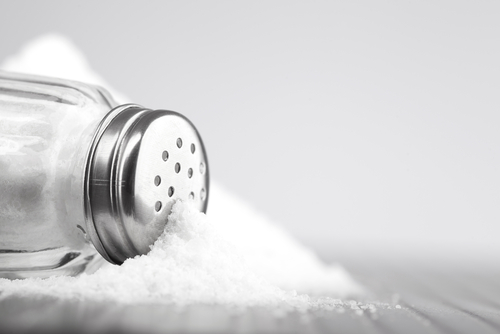 For quite some time I’ve refrained from adding salt to my food at home. My blood pressure has always been on the high side, so I must be careful. My doctor has tried to give me blood pressure medication for the last decade, but I’m a hardhead and I’ve refused to take it. All medications can potentially wear out your liver and kidneys and I felt I may need those two organs in optimal condition in the future.

Then I learned a few things while doing research for my book, The 1st Aisle. Sodium (approximately 40% of salt) is the problem. For the average American, only 10%-15% of his sodium intake is from the salt shaker. The other 85%-90% is already in most of the processed foods that we eat.

Our problem with salt began in the early 1900s. Food manufacturers had to figure out a way to preserve food to mass produce it, ship it and sell it. Sodium was the answer, since salt has been used for thousands of years as a preservative. But, we’ve gone too far. Most processed food products include sodium, not only to preserve food, but for taste, color, binding and texture.  If you eat lots of packaged foods and restaurant food, it’s impossible to control your sodium intake.

You may not have heard of any of those laboratory creations, but they’re widely used. The biggest problem is you can’t taste most of them in processed food, so you can consume sodium with reckless abandon. No wonder the average American consumes 3,500mg of sodium per day, when the recommended maximum intake is 2,300mg per day.

The solution: Look at every label on the food you eat and reject anything with added sodium. That may be too much work. A much better solution is to buy fresh produce from the first aisle of the supermarket. That should guarantee there is not added sodium. Veer away from condiments and other mass-produced foods in bottles, cans and sealed packages.

Enjoy the process of preparing your fresh produce in your own kitchen. If you desire, add only a minimal amount of sea salt, after your fresh produce is prepared. Strive to do that for at least for 80% of the meals you eat and it’s a high probability your blood pressure will improve.

Eat out as a treat, but eat in as a daily special event!