AIDS Isn’t Cured, We Just Don’t Talk About It 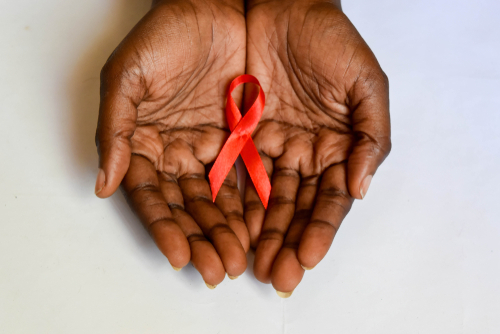 It was December 1, 1990. Unbeknownst to me it was the Second Annual World AIDS Day. It was supposed to be the happiest day of my life…my wedding day. Little did I know that the man to whom I was pledging my vows to God in front of family and friends had AIDS.

The man I fell in love with married me knowing he had full-blown AIDS and did not tell me. He wined and dined me, and proposed to me five months into our relationship. The end of our getting-to-know-you phase ended and the planning-my-fabulous-out-of-town wedding began.

Thinking back, there were so many red flags. There were so many things that felt wrong. However, I just chalked it up to “wedding stress.” The moment we said “I do” and were on our honeymoon in Hawaii, he changed. I mean, I did not recognize my husband. This Dr. Jekyll/Mr. Hyde behavior continued for two years until he showed signs of the illness.

He was diagnosed with full-blown AIDS and the only reason why I knew about the diagnosis was because the doctors wanted me to get tested because they thought I was infected, as well. They tried to convince me that there was no way I couldn’t be infected. After all, he was my husband and there was no reason for us to have protected sex, especially since I wanted to have a baby.

I could see how they could think I would have the disease. But I knew that I didn’t. I had to burst in to a full-on rant like a Black woman from the South Side of Chicago to get those folks to take my blood so they could tell me I was negative.  I was HIV-negative and still am…Hallelujah!!!. I know I am God’s Girl and I am covered by His Grace AND I have a rock-solid immune system.

I stayed with my husband, doctored on him even though I was not yet a doctor, got his T-Cell count up from four to 100. I changed his diapers until he died in hospice. It was not until he died that I discovered my husband was on the down low and had married me knowing he was already infected.

I had some incredible people holding me up in the village I have created for myself. One of them is Debra Fraser- Howze, who was the CEO/Founder of the National Black Leadership Commission on AIDS. You can read the detailed account of how she helped me and how I got through it all in my memoir Faith Under Fire: Betrayed by a Thing Called Love.

While my story has a happy ending, many stories don’t. HIV and AIDS is an indiscriminate disease that cuts across every geographical, socio-economic, ethnic, gender, culture and religious line. It leaves devastation and heartbreak in its wake. Many think that the medicines can control the spread of HIV and AIDS because people don’t look sick the way they did in the early days of the disease. But nothing could be further from the truth.

The latest HIV/AIDS statistics from the CDC reports:

I am also very concerned about the college population, who are often overlooked. The New England Journal of Medicine stated a decade ago that this was a growing group. Why are students not being educated about the fact that STDs are a precursor to HIV?

The college-aged demographic tends to use condoms less than any other demographic, especially when drinking alcohol or using drugs. More than 45% of college-aged students who have been binge drinking fail to consider the use of contraceptive aids when engaging in sexual intercourse. These bad decisions can be traced to immaturity, alcohol and a lack of education and prevention programs.

I have created an HIV/STD Education and Prevention Program entitled: “What You Don’t Know About HIV/STDs Can Kill You.” Before you Swap Spit… Swap Information like, “Do you know your status?”

I have 200 of questions in the back of my book that young people (and older people, too) should have ready before engaging in sexual contact. Please don’t be like me and become so enamored with the “cutie pie” in front of you.

I did not complete my due diligence. We do more investigation when buying a new dress or a new car than we do with the one we are going to get in bed with. we can talk about abstinence (the most sure-fire way to not get STDs) and prevention. We can talk about keeping your immune health in tip-top shape, which I am sure is one of the major factors that save me.

Many people have weird theories about food and exercise that cause them frustration and harm. It’s possible they want what’s best, but when...
Read more
Healthy

This may come as a shock to you, but there is no such thing as good food or bad food.  Food is...
Read more
Healthy