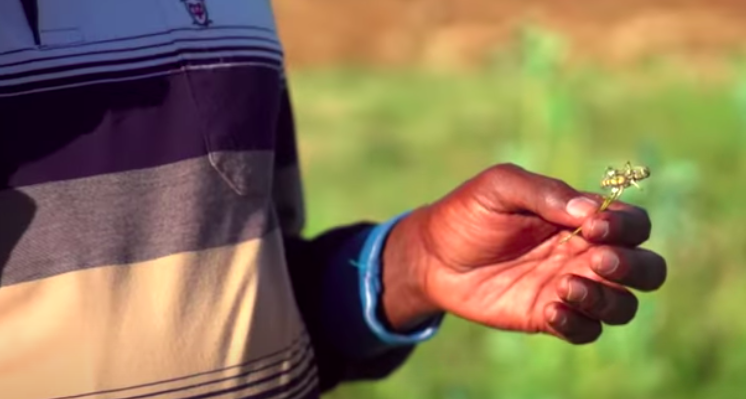 Kenya is once again battling a swarm of desert locusts in a surreal real-life emergency invoking scenes from the Bible.

Local farmers are distraught as the insects are devouring their crops and pastures. According to the UN Food and Agriculture, as many as 3.5 million people could be impacted by May.

“They’ll finish (everything) look at this corn, if you look at it, it means that it only has today and tomorrow, the day after that there will be nothing left,” farmer Jane Gatumwa told AfricaNews. “We used to have some weeds that we used to feed our cattle but nothing is left now, they (the locusts) finished everything, it’s all dried up. “

In the Biblical story of “Moses and the Ten Commandments,” ten plagues were inflicted upon ancient Egypt as a divine punishment. Moses, a prophet and leader of the Hebrews, warned the Pharaoh that plagues would ravage his kingdom if he did not free the Israelites and allow them to go back to Canaan. The Pharoah remained defiant, so the ten plagues were unleashed.

Last year, Kenya faced its worst locust invasion in 70 years, endangering millions of people’s food security. But the cause of the destructive locust swarms is not so prophetic. The insects have been reproducing rapidly because of unusual rainfall patterns in neighboring countries.

At least 121 of the colonies have already been contained.

Kenya is working in partnership with the FAO, World Bank, County Governments, Kenya Defense Forces (KDF) and the Desert Locust Control Organisation for Eastern Africa (DLCO-EA), among other stakeholders, to contain the situation.

“The Government has deployed all interventions to contain the situation including collaborating with other development partners such as FAO, World Bank through Emergency Locust Response Program (ELRP) and County Governments,” Oguna adds. “The pests control operation has largely been successful in reducing the magnitude of damage caused by the pest and the Government is committed to ensuring total eradication of the pests to ensure food security for all Kenyans,” Oguna stated.

The Famine Early Warning System has warned that several parts of the Horn of Africa currently face a food crisis due to desert locusts’ swarms and are predicting a lack of food will severely Ethiopia, Sudan and Yemen.

If you’d like to help, you can donate to Action Against Hunger’s East Africa Relief Fund.