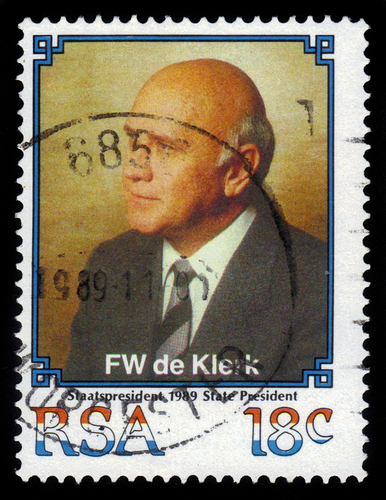 “President Cyril Ramaphosa has declared that the national flag be flown at half-mast as a mark of respect,” his office said in a statement. His family will hold a private funeral this Sunday, while a state memorial service will be held in his remembrance at a later date.

While de Klerk did win a Nobel Peace Prize alongside Nelson Mandela for ending the country’s long-running apartheid system, de Klerk was considered a right-hand to his predecessor, P. W. Botha, who fought to preserve apartheid and continue the government’s oppression of Black South Africans.

“I grew up on a farm where I came to know black people very well,” Botha told Joseph Lelyveld in his 1985 book “Move Your Shadow: South Africa, Black and White.” “I played with them, I worked with them. I was taught by my father to be strict with them, but just.”

In 1997, during a speech to the Truth and Reconciliation Commission, 1997, de Klerk said: “I apologise in my capacity as leader of the NP (National Party) to the millions who suffered wrenching disruption of forced removals; who suffered the shame of being arrested for pass law offences; who over the decades suffered the indignities and humiliation of racial discrimination.”

But Black South Africans found it hard to reconcile de Klerk’s past with his questionable change of heart.

“We have a murderer in the House,” said EFF leader Julius Malema, adding that de Klerk was an “apartheid apologist… with blood on his hands”.