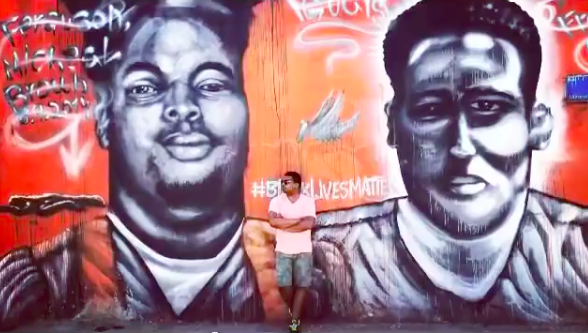 Brazil is often known as a mecca for street art because of the ingenuity and social impact of the works of artists before and after the decriminalization of graffiti in 2007.

In a previous note, I mentioned an artist I first encountered in 2011.  A random block in a tiny neighborhood bore a testament to political solitary and the global impact of the Black Lives Matter movement.

The Michel Brown and Freddy Gray mural sits in a neighborhood called Barbalho. Still there to this day, tucked away in a tiny ghetto alley.

Brazilian street art began as a direct response to the New York graffiti scene of the 1970s. What started with Black and Brown kids tagging their names around a gritty urban canvas, eventually became the official written language of the Hip-Hop generation.

This graphic element followed Hip Hop around the globe.

Social media is the easiest way to see how international street art has become a part of everyday life. A recent style combining mural art and urban landscaping has connected communities in the United States and Brazil. Fabio Gomez, an artist from the southern state of Goiânia, was surprised to see that his murals had become viral among Black Twitter after being shared by Oscar winner, Viola Davis and Beyonce’s mother, Tina Knowles.

The mural of a young Black girl strategically sits under the full branches of a tree, giving the illusion of a large green Afro.

Fábio’s art portrays landscapes, nature, and popular images of Indigenous and Black people. The viral mage took him three days to finish and he has since completed two additional murals as the original tree sheds its leaves.

Fabio’s mainstream images show the public acceptance of street art, but some other notable artists, collectives and movements around Brazil continue the subversive, political tradition of graffiti.

Brazilian artists pioneered a pre-form graffiti style that is a distinct feature of the metropolitan areas of Rio de Janeiro and Sao Paulo. The style is called Pichação, which comes from the word piche meaning “tar” from the original material that was used.

Pichação is an aggressive writing style using slim, equal-sized glyphs, letters and symbols to spell the names of individuals and crews. These names are tagged alongside buildings with artists competing to tag the tallest area of building and other structures in the cities.

Pichação represents a direct response to the class struggle in post-dictatorship Brazil. It’s rare to find a high-rise building in Sao Paulo without the cryptic Pichação writing tattooed on the designer properties.

Back in Rio, the street art collective, Negro Muro was formed after a group of cultural creatives decided to do something about the lack of Black heroes in the public spaces of Rio de Janeiro. The group began by painting a mural of Fela Kuti in the neighborhood of Grajau.

Each of the figures portrayed is designed to be an inspiration for new generations to fight against. Since 2018, the collective has produced ten pieces.

“The fight against racism, for the valorization of blackness, is an eternal fight. Art can make us look up, get inspired for our daily lives”, said Pedro Rajão, creator of the project.

The group’s artist Cazé emphasizes the role of social memories for Blacks living in the cities. In a local radio interview Caze stated:

“We end up being art educators because throughout the process of making art, Pedro is contextualizing that subject for folks in the neighborhood who are often unaware of the existence of that person.”

Negro Muro are currently crowdfunding to continue to add their Black history murals to other neighborhoods.

You can contribute to their campaign here: https://www.vakinha.com.br/vaquinha/vamos-colaborar-com-o-projeto-negro-muro