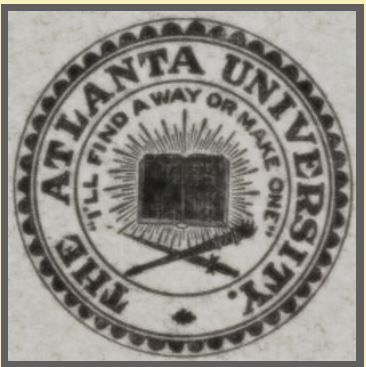 Shortly after the end of the Civil War, Atlanta University was founded by the American Missionary Association and received subsequent assistance from the Freedmen’s Bureau. During the late 1870s, Atlanta University began providing bachelor’s degrees and supplying Black teachers and librarians to public schools throughout the South.

By 1929, the institution began offering graduate courses in liberal arts, social and natural sciences. The selection continued to increase with graduate programs in social work, library science, and business administration. During this time, the institution began to associate with fellow colleges in Atlanta, Spelman, and Morehouse, in a university plan known as the Atlanta University System. With the new association to Spelman and Morehouse, the modern organization of the Atlanta University Center was able to emerge.

The Atlanta University Center saw significant developments in the years to come. The schools of library science, education, and business administration were all established by 1946, and the Atlanta School of Social Work gave up its charter to officially become part of the University. W.E.B. Du Bois was one of the founding faculty members at the School of Social Work and authored one of his most influential works during his tenure. Du Bois even served as chair of the sociology department from 1934-1944.