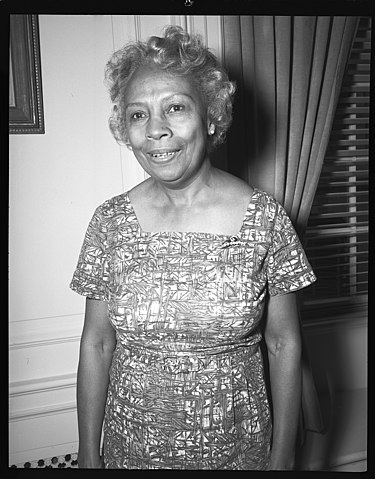 The scholar-librarian, Dorothy Porter Wesley, was born May 25, 1905, in Warrenton, Virginia. Wesley created a leading modern research library that continues to serve both the Howard University community and an international community of scholars.

She was born Dorothy Louise Burnett to Hayes J. Burnett, a physician, and Bertha (Ball) Burnett, a tennis player. She grew up in a predominantly white neighborhood in New Jersey and attended racially mixed public schools. After graduating from high school, Wesley enrolled at Miner Normal School (a teacher’s college that later became part of the University of the District of Columbia) in 1923. Despite being in school for teaching, Wesley felt drawn to a developing love of books.

Wesley took on the role of being a librarian for a year by filling in for a librarian at Miner who was out on sick leave. While covering for the librarian, Wesley realized that she needed to attend college so she enrolled at Howard University and received her degree in 1928. In 1932 she graduated from Columbia University and became the first Black woman to be awarded a master’s degree in library science from the university.

After joining the library staff at Howard University, Wesley was appointed to organize and administer a “Library of Negro Life and History” to incorporate 3,000 works presented by Jesse Moorland in 1914. Moorland Foundation opened in 1933, and the university went on to purchase the Arthur Spingarn Collection.

When Wesley retired in 1973 the retitled, Moorland-Spingarn Research Center, consisted of more than 180,000 books, pamphlets, manuscripts and other primary sources. She was an avid writer and researcher. While working at the research center, she developed research tools and bibliographies that would later be known as Black Studies. Some of her works include “A Selected List of Books by and about the Negro,” and “Early American Negro Writings: A Bibliographical Study.”

Researchers and scholars have come from all around the world to engage with the invaluable collection organized by Wesley. In the years after her retirement from the research center, Wesley continued to stay busy by researching, writing and publishing books. Wesley received several honorary degrees and in 1994 former President Bill Clinton presented her with the National Endowment for the Humanities’ Charles Frankel Award.

Dorothy Porter Wesley died on December 17, 1995. Howard named the library reading room the “Dorothy B. Porter Reading Room” for all of her years of service.

Dr. Greg Carr, head of the Africana Studies Department at Howard University, breaks down the impact of Porter in a discussion with Karen Hunter: