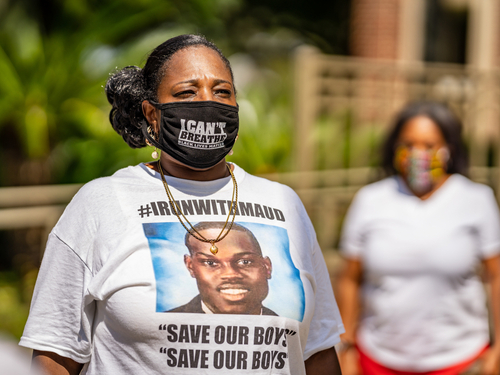 All three men who stood trial for the killing of Ahmaud Arbery have been found guilty.

The jury took around 11 hours of deliberation to reach the verdict. All three men are now facing life in prison. The younger McMichael, who shot and killed Arbery, was convicted on all nine counts. He was found guilty of five counts of malice murder and four counts of felony murder.

His father, Gregory McMichael, was found guilty of four counts of felony murder that he was convicted on. He was found not guilty of malice murder.

While the third defendant, William “Roddie” Bryan Jr, was convicted on three of the felony murders counts as well as charges of aggravated assault with his pickup truck, false imprisonment and criminal intent to commit a felony.

Marcus Arbery Sr., the father of Ahmaud Arbery, rejoiced over the verdict. “we conquered that lynch mob,” he said per CNN.

“For real, all lives matter,” he said. “Not just Black children. We don’t want to see nobody go through this. I wouldn’t want to see no daddy watch their kid get lynched and shot down like that. It’s all our problem,” he continued. “So hey, let’s keep fighting. Let’s keep doing and making this a better place for all human beings.”

“We want you to know that from the moment this case came to our office, it was our foremost goal to ensure that we got justice for Ahmaud Arbery’s family, and in particular, we are so very proud and thankful for the confidence that the family has given to us,” she said on the steps of the courthouse.

A date for sentencing has not been set by the judge.