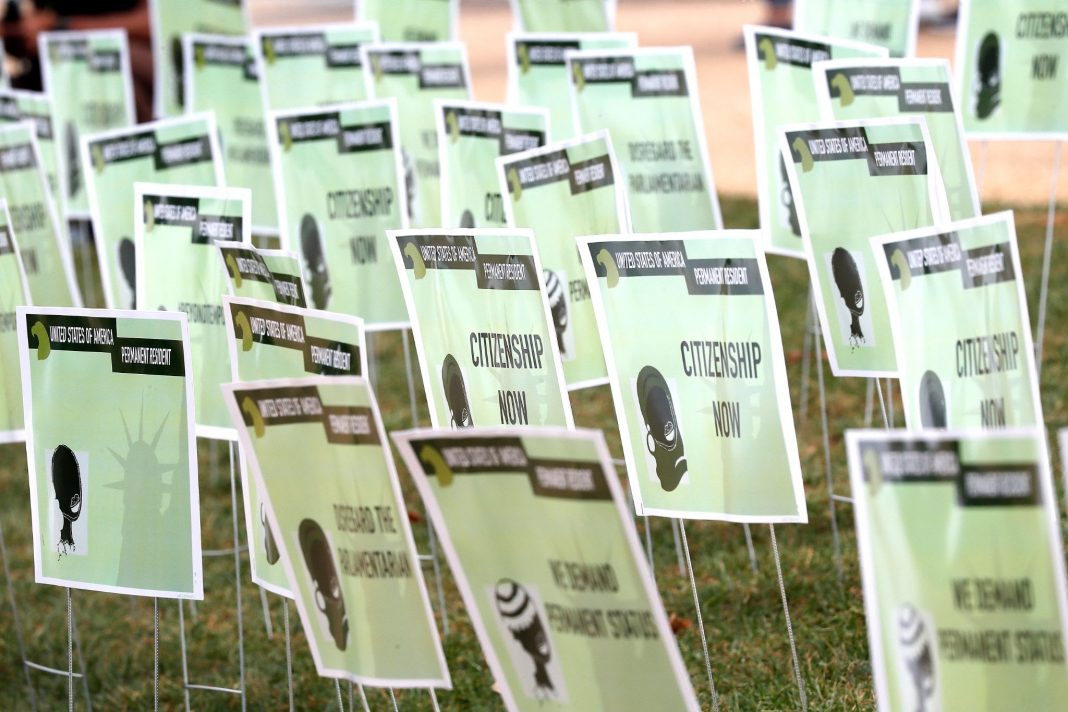 Communities United for Status and Protection (CUSP) planted green cards in front of the U.S. Capitol to urge Congress to include a pathway to citizenship.

Yesterday, CUSP, a broad coalition of immigrant groups and its members planted green cards in front of the U.S. Capitol to demand that Congress include a pathway to citizenship in the reconciliation process for 400K Temporary Protected Status holders and millions more without status.

“Nothing and no one should stand in the way of Democrat leadership delivering their campaign promise: citizenship. Biden-Harris must now do their part and ensure that there is permanent residency legislation in the reconciliation package and that it becomes law,” said Patrice Lawrence, executive director of UndocuBlack Network.

In addition to the visual demand for permanent protection, CUSP held a press conference where temporary protected status (TPS) holders, advocates and leaders of Black immigrant rights organizations urged Sen. Schumer and Vice President Harris to go beyond the parliamentarian’s non-binding advice to include a permanent legal status for the millions of undocumented people who have been keeping the country afloat during a deadly global pandemic.

“You have come to our communities. You have made promises. Vice President Harris and Democratic leadership enough is enough. Our lives are not temporary. We demand citizenship for all those behind me, for all those hiding under the cloud of fear,” Guerline Jozef, co-founder and executive director of Haitian Bridge Alliance declared.

“We cannot wait for another election cycle for a pathway to citizenship,” said Adam Beddawi, D.C. policy manager for the National Network for Arab American Communities.

Speakers at the press conference also included impacted individuals sharing their testimonies on the current unjust pathway to citizenship for immigrants.

“I have not had an easy life. I have lived my life without my son and daughter. Coming to the U.S. was my only option to provide for my family in Guinea,” Aminata Sow, member of African Communities Together shared.

“I came to the U.S. in 2002 leaving my family behind … Today I am representing nearly 15,000 Nepalis TPS holders whose lives are on the line,” Sitar Llama, member of Adhikaar says. “I was not able to see my kids grow up. My wife and I have lived apart for 20 years. I work very hard 11-hour shifts, but I cannot get a promotion without a green card. The White House and Congress make our lives hard by not giving us citizenship.”

A letter to Vice President Kamala Harris from CUSP calls the VP to use the full extent of her existing authority to ensure a pathway to citizenship is included in the Build Back Better budget reconciliation package.

“You are the first person in national office to represent so many of us. The immigrant communities impacted by the Build Back Better proposal are disproportionately women of color, many of whom hail from the communities we represent, including Black, Brown, Arab, Middle Eastern, Muslim, and South Asian communities that have long supported the Biden-Harris agenda. These women — and what they contribute to society — are not temporary, and their protections should be permanent.”

Communities United for Status and Protection (CUSP) is a collaborative of grassroots immigrant community organizations working together to win permanent status for its members and communities and to build a more inclusive immigrant rights movement that centers the needs and experiences of African, Afro-Caribbean, Afro-Latinx, Arab/Middle Eastern, and API immigrants. It includes: African Communities Together, Adhikaar, UndocuBlack Network, Haitian Bridge Alliance and the National Network for Arab American Communities.