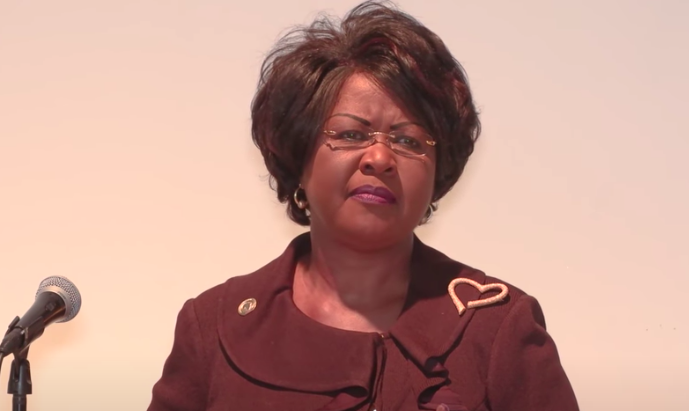 “We need to come together. We need to first decolonize the Black mind. We need to take time to sincerely inventory who we are and how we were colonized, otherwise the battle is going to be lost,” Dr. Chihombori-Quao told the audience.

Dr. Chihombori-Quao is recognized internationally for her no-holds-barred delivery of the facts.

During her speech at the HBCU Africa Homecoming Media Launch in June, she faced backlash for saying: “You may ask why African leaders haven’t done anything about this deplorable situation but let me tell you, my brothers and sisters, they have tried.” Dr. Chihombori-Quao added: “It is documented to this day that in the 22 coups where leaders were assassinated, France had something to do with it.”

The diplomat made headlines last year after being fired from The as the African Union’s U.S. ambassador spoke out about France’s occupation and hold over its former African colonies.

She was terminated on October 7, 2019, reportedly by a letter from the chair of the African Union, Moussa Faki Mahamat. The decision faced instant pushback from the international community.

“The colonists never left,” Ambassador Chihombori-Quao told the Amsterdam News. “There are various factors really if you were to talk about why Africa is the way Africa is today. The reality is the colonizers have never left. They are still very much involved in everything we do, and until we realize that when we got our independence in the ’50s and ’60s we only got political independence. Even that is limited because they still dictate and control who becomes the next president in the country.”

France and Great Britain have been accused of having “indirect rule” over their former African colonies, with France displaying very little remorse for its savage history on the continent.

In January, French President Emmanuel Macron revealed that he had no intention of issuing an official apology for France’s exploitation and bloodshed in Algeria. Macron insisted that there would be “no repentance nor apologies” for the occupation of Algeria or the bloody eight-year war that ended 132 years of French rule. Macron’s instead opting to undertake a number of “symbolic acts” aimed at promoting reconciliation.

A petition demanding her reinstatement accumulated more than 100,000 signatures.

Dr. Chihombori-Quao shared that she was taken aback by the response to her dismissal.

“I did not see it coming. It was somebody who sent me the petition and I just saw it like everybody else and I was really shocked. I did not realize that the work that I had been doing had reached that far. I was just a mother, a grandmother, who happened to be a diplomat speaking our truth,” she said. “But also I felt that I had been given a platform to represent 1.27 billion people on the planet and 250 million within the Americas and that if I did not speak up about the evils and the ills I see every day, I saw every day, and continue to see every day, then that would mean the 1.27 billion people on the continent and the 250 million in the Americas will be voiceless. That is not something I was willing to do.”

Dr. Arikana Chihombori-Quao continues to fight for Africa and for Africans no matter the cost… she is a true Woman of Power.