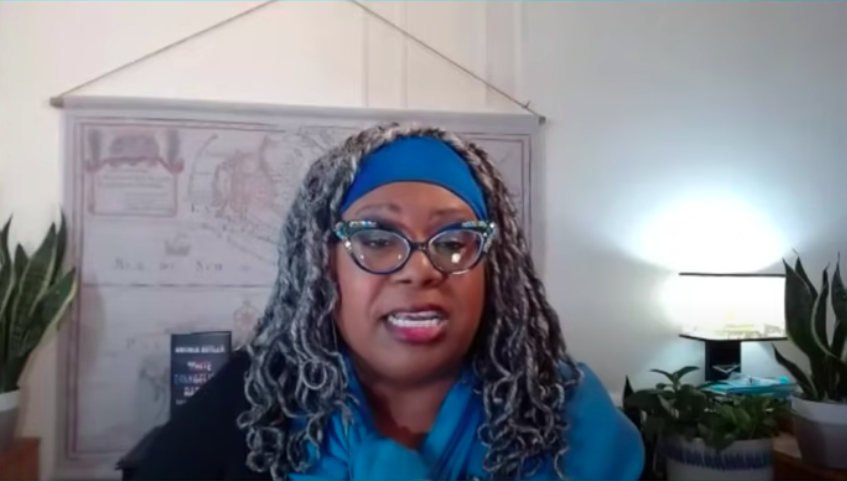 Dr. Anthea Butler appeared on the Karen Hunter Show to discuss the relationship between Christianity and racism which she examines in her latest book, “White Evangelical Racism: The Politics of Morality in America.”

During her discussion with Karen Hunter, Dr. Butler answers the question of how God became white through the history of Christian art since the middle ages in Europe, as well as how Christianity has historically been used as a tool of oppression against Black folk.

About halfway into the conversation, Dr. Butler takes a question from a caller named Alexander, who first asks Dr. Butler if she is a Christian before referring to scripture and stating that spirit is more important than flesh, and that spirit sees no color.

In response, Dr. Butler poses the question, “If the spirit sees no color, then why do we continue to see color and why is there still racism?”

“Obviously the spirit is not working in the flesh of people in America right now that keep killing Black folks,” says Butler. “How is the spirit working in Romans 8 when Black people are still dying?”

Over the course of her conversation with Dr. Butler, Hunter discusses her own experience unlearning and relearning history through different lenses.

“I struggle with academia because in many ways we have been sent to school to be indoctrinated,” said Hunter.

“But I’m talking to somebody who is an Africana Studies person, who also studied religion,” she said, referring to Dr. Butler. “Your lens is not through the way in which they tend to indoctrinate us – you’re not here regurgitating white ideology, you’re challenging it.”

“If you are learning that [what you have been taught] is not true, are you nimble enough to pivot and relearn?” Hunter adds. “Or do you want to double down on wrong?”

You can purchase “White Evangelical Racism: The Politics of Morality in America” here: