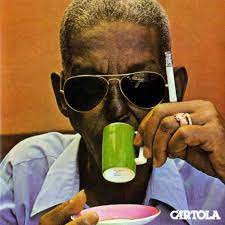 This week marks the birthday of “Cartola” Agenor de Oliveira, who was one of Brazil’s most renowned composers and singers. Born in Rio de Janeiro in 1908, he is one of the founders of the Mangueira samba school in Rio. Cartola was the son of a poor factory worker and his family moved often. As a preteen, he was baptized into Samba music by his older friend, Carlos Cachaça, who went on to be his longtime musical bandmate.

At an early age, Cartola dropped out of school and began working various manual labor jobs. Tragedy struck when he lost his mother at age 15. Soon after, his father kicked him out of their home, disapproving of his bohemian lifestyle.

He found himself in a town called Morro da Mangueira, where he began to sing in bars. His skills grew and he became a local sensation in the samba circles. Teaming up with other local musicians, together they started the Estação Primeira da Mangueira Samba School in 1928. Cartola chose the school’s name and colors, green and pink.

His major introduction in the popular music scene was in 1929, with the sale of his original composition, “Que Infeliz Sorte” (Such Bad Luck) which was bought and recorded by popular singer, Francisco Alves. That same year, the singer recorded one of his greatest hits, “Divina Dama” (Lady Divine).

Over the next decade, his compositions would go on to be recorded by the world’s most popular Samba singers including Carmen Miranda, Silvio Caldas and Aracy de Almeida.

Cartola teamed up with dancer, Paulo da Portela and musician Heitor dos Prazeres in 1940, to create the radio show,  “A Voz do Morro” (The Voice of the Hill) and the band, Conjunto Carioca, which performed all over the country during the 1940s.

Towards the end of the decade, Cartola had a well-known falling out with the president of the Samba school he helped form. This public fight led him to quit music.

In 1956, a journalist named Sérgio Porto discovered Cartola working as a car washer in Ipanema. He was happily married to Eusébia Silva do Nascimento or  “Zica”.

Together, they opened the Zicartola restaurant in downtown Rio de Janeiro, on the famous Rua da Carioca street. The restaurant became an important meeting space for the samba community. The mecca was frequented by students, writers, actors, film artists and journalists.

Cartola’s legacy as an artist truly represents the evolution of samba. His original style and arrangements of harmonies, melodies and lyrics represent the essence of his region of  Mangueira. His vast catalog of compositions includes countless Brazilian standards.

In a 1980 article in the newspaper, Jornal do Brasil, journalist Carlos Drummond, says this about the musician, ” Cartola knows how to sympathize with those who love for the vocation of loving, and they renew themselves by loving”.

By the 1960’s Bossa Nova became the popular sound but it lacked the Blackness and authenticity.

The struggles of the Black population during the dictatorship created a longing for the original sound of Cartola’s generation. In 1974, at age 65, Cartola reemerged to record his first LP. The record was praised by critics and the public, receiving several awards. During his revival, he released four more LPs, including such as “As Rosas Não Falam” (Roses Don’t Speak) and “O Mundo É um Moinho” (The World is a Mill). He toured his body of work around Brazil until his death in 1980, in Rio de Janeiro.

In 2006, a documentary about his life was released: “Cartola, Música para os Olhos” (Music for the Eyes).