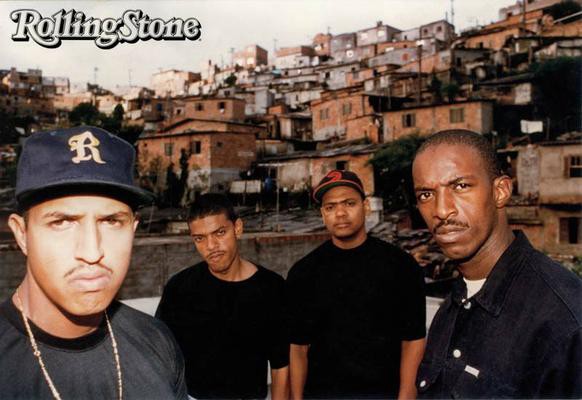 The group was formed in the early 80s in Sao Paulo by the lead man, Mano Brown (Pedro Paulo Soares Pereira) and Ice Blue (Paulo Eduardo Salvador). The two were childhood friends in the southside. Their mothers were friends and Afro Religious practitioners at a local spiritual house.

Mano Brown initially started the group as a Samba group with Ice Blue. They would later meet and become friends with, Edi Rock (Adivaldo Pereira Alves) and KL Jay (Kléber Geraldo Lelis Simões). Rock and KL Jay are from the north side of the city. All the members grew up in impoverished favela neighborhoods.

Throughout the 80s, they frequented various music festivals and parties where Edi Rock found success opening up for local rap groups and KL Jay found work as a b-boy. Their big break occurred at Largo de Sao Bento, an important hip-hop spot in the city, famous record producer – Milton Salles. In 1988, Salles suggested the four artists combine to form a group which he would sign and manage.

The group’s name was inspired by the music of another influential Afro Brazilian musician, Tim Maia.

Maia experienced a psychedelic phase in his Brazilian funk career known as the “rational” (racionais) phase. The group adopted the name after the influential musician whom they frequently sampled in their records. Their first major records in 1988, exploded onto Brazilian radio with poignant depictions of life in the favelas. Pânico na Zona Sul (“Panic on the Southside”) and Tempos Difíceis (“Hard Times”) were firsthand reports on racism, police violence, racism, poverty, and corruption.

The group’s first album, “Holocausto Urbano” (Urban Holocaust) debuted in 1990. They performed all around the state of Sao Paulo over the next few years, including performances in juvenile detention centers. This cemented their status as musical activists. In 1991, the group served as the opening act for Public Enemy during their world tour stop in South America. Their popular hit, “Pânico na Zona Sul,” samples Public Enemy’s now-classic, “Fight the Power.”

Over their career, Racionais MCs developed a hip-hop sound and reputation for political and educational rap. They were the face of the Brazilian Ministry of Education’s RAPensando a Educação (“Rap-Thinking Education”) program. They toured schools lecturing on a variety of social issues affecting Afro Brazilians.

The production of the group’s albums over the years expressed an appreciation and solidarity with the African American musical tradition with samples from several influential artists including James Brown, Marvin Gaye, The Meters, and Curtis Mayfield. Their political philosophy can also be seen in their album art.

Their second EP “Escolha Seu Caminho” (Choose Your Path) has a front cover image depicting the group around a table occupying themselves with guns, drugs and money. The back cover presents the opposite “path”, showing the group around the same table filled with books they’re reading and taking notes from.

[or] Maximum betrayal, thieves, and drugs

The second option is the fastest way

Racionais launched into global fame with their second studio album, “Sobrevivendo no Inferno” (Surviving in Hell) in 1997.

This monumental album was the first production on their independent label, Costra Nostra. The album sold over 1.5 million units, propelled by the single “Diário de um Detento” (‘Diary of a Detainee’). The track was produced and written as a collaboration between Manu Brow and Jocenir, an inmate at the notorious Brazilian prison, Carandiru. The penitentiary was the site of the historic 1992 Carandiru massacre.

During an inmate uprising, Brazilian military special forces descended upon the prison resulting in the murder of  111 inmates. Considered internationally as a human rights crime, none of the officers indicted have served jail time. The music video portrays the horrors of the prison and juxtaposes them with other global atrocities.

After nine albums and over thirty years in the rap game, Racionais MCs stand as hip hop legends. The group is often compared to Public Enemy, NWA and The Wu-Tang Clan due to their politically-laced street storytelling and relentless authenticity.

Group founder, Manu Brow, debuted his podcast “Mano a Mano” on Spotify in August 2021. Along with waxing on his history with the group, Brow interviews a host of diverse and controversial guests from the worlds of music, sport, politics, religion, society and culture.

His interview with the former president of Brazil, Lula was the most listened to podcast episode in the country.