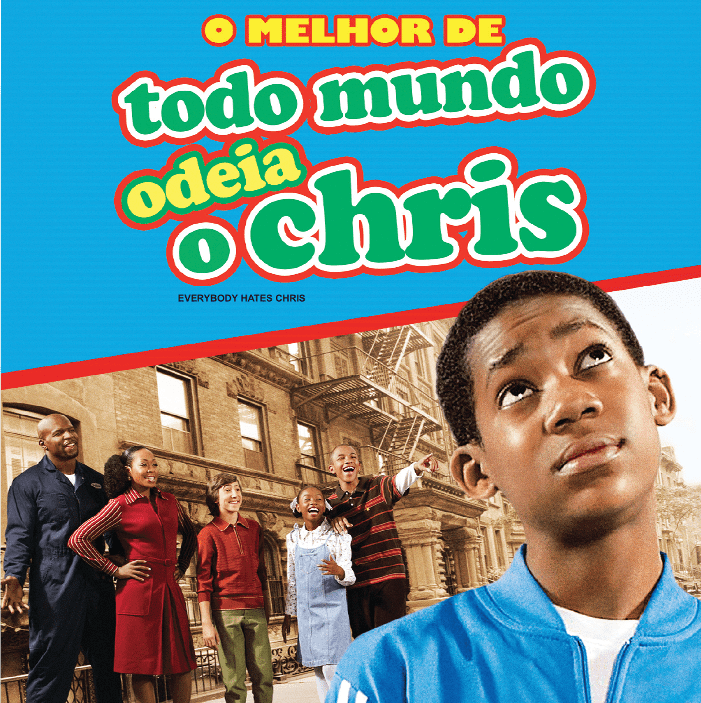 It was unusually quiet one afternoon. The routine neighborhood bustle of the day had frozen. Waves of laughter echoed through the windows all around the favela. I looked in the open door of my host’s family room and saw them absolutely cracking up as an episode of “Everybody Hates Chris” played on the large flat-screen TV.

Only a few months into my Black diaspora voyage, I was still stunned by the familiar sounds and images of Hollywood media in these unfamiliar places. I had caught a few episodes of the show on syndication, but before leaving the States in 2011, I was regularly watching media through Youtube and Netflix.

Like many, I felt familiar with the lore of the show through the stand-up comedy of its creator and protagonist, Chris Rock.

This reminded me of how at the height of ABC’s TGIF programming block which dominated 90’s television, we only called “Family Matters,” “The Steve Urkel Show”, or simply “Urkel.”  Unlike the Winslows, for Brazilians, the Rock family is not overshadowed by the leading man.

Quite the contrary, as I learned when my neighbors schooled me on why either Chris, Drew, Tonya, Julius or Rochelle, were their favorites. Rochelle, played by Tichina Arnold, was the clear favorite.

She is literally an icon in Brazil.

The deeper reasons why the Black families in my neighborhood in Salvador and all over Brazil, celebrated this dark-skinned, resilient Brooklyn family felt quite familiar to me.

Ten years later, the popularity of “Everybody Hates Chris” in Brazil is one of those legendary pop culture stories like David Hasselhoff’s cult status in Germany. When they described the collective ritual of watching “Chris” in the afternoon, I recognized the special space created by a television show like this one.

A genuine phenomenon, the show premiered on the second-largest network which happened to be a publicly accessible channel, Rede Record (owned by the mega-rich Universal Church of the Kingdom of God). The show was broadcast in 2010 at 6 p.m. on an open channel and a year later was the second highest viewed show on television. In the acutely racist Brazilian media landscape, “Everybody Hates Chris” immediately proved the ability and success for a show with a majority Black cast.

Joel Zito Araújo, a legendary Afro Brazilian filmmaker says that during the research for his 2000 documentary on the Black presence in Brazilian soap operas, he found that 75% of the roles for Black actors were in positions of subservience. According to Araujo, “The roles represent the way in which Brazilian society likes to see Black people: as slum-dwellers, domestic servants, criminals. This is still happening today.”

When it comes to Black women, in particular, researchers at the State University of Rio de Janeiro report that Black women comprise only 4.4% of the main character roles on TV and film. And in advertisement campaigns, they represent only 1%.  Much like the United States, the first major roles for Black women represented stereotypical archetypes and Black subservience.

The first major Afro-Brazilian actress, Isaura Bruno, was born in Sao Paulo in 1916. The daughter of former enslaved Afro-Brazilians, she had a tragic childhood and spent most of the first half of her life in poverty working as a domestic worker.

Through her work cleaning the homes of elites, she learned about an acting job from the cook of a prominent filmmaker. She convinced him to give her the role of a mammy character. This entry into Brazilian film led to her being the go-to actress for maid characters in soap operas during the 60s. For a short period, she experienced a notable level of popularity as the soap opera format dominated media. By the end of the decade, during a phase of great economic growth in Brazil, Black artists like Bruno were locked out of this boom through discriminatory practices.

By 1977, she was mostly forgotten by the public and the friends she’d made in the industry. Isaura Bruno died of a heart attack on the streets of Sao Paulo while selling candy.

“Everybody Hates Chris” revolves around adolescent Chris and his working-class Black family from Brooklyn. Chris experiences racism while he studies and also works to contribute to his family. Black kids in Brazil relate to the working-class setting of the sitcom and the fact that Chris takes the city bus to school. He has the added responsibilities of looking after his siblings, all of which fill his days with adventure.  The voice-over acting in Portuguese for Chris, as the narrator, and the supporting characters are seen as one of the major highlights of the show.

Julius is a strong, dark-skinned, highly responsible father figure adored by Afro Brazilian families. He constantly works, desperate to pay the bills and to save as much money as possible. Scenes from Julius’s character about the costs of each of life’s expenses are often repeated as jokes among Black Brazilians. Ultimately, his character is lauded as a strong example of a modern man.

The real star of the show is Chris’s mother Rochelle, affectionately known as Roxele (Roe-shell-ee). Each episode her bombastic character represents aspirational levels of self-possession. Like afro Brazilian mothers, she’s a master of her domestic politics, she loves to treat herself well as evidenced by her frequent beauty shop scenes and she has high expectations for her children, especially Chris.

Everyone here is aware of her catchphrase, “Eu não preciso disso, meu marido tem dois empregos! / I don’t need this, my man has TWO jobs!”

Tichina Arnold has visited Brazil several times, touring the country to meet fans of “Everybody Hates Chris” and participating in Carnival. Rochelle is a dominant figure that looks like the true face of Brazil. Her character is both humorous and strong, regularly used to explicitly and cleverly comment on race and class issues. These are issues apparent in the lived experiences of Black people globally who are not guaranteed the platform to express this themselves. This is especially true in Brazil and unfortunately has yet to really find this level of mainstream representation. The continued absence of this represents a tradition of violence and the embracing of the sitcom by Black Brazilians is a clear sign of resistance to racism.

“Everybody Hates Chris” is also loved by white audiences in Brazil, but perhaps for different reasons. Today, if you go to the social media accounts of Tyler James Williams, who played Chris on the show, under nearly all of his posts you will see literally thousands of comments in Portuguese. Some of these comments are genuine greetings from fans, but most of them are a unique meme-ing and spamming of the actor’s official profiles.

Since the show’s cancelation, Williams has grown physically of course and professionally starring in dramatic series’ like the “Walking Dead” and feature films like “Dear White People.” Despite this, each time he creates a post he is inundated with comments from Brazilians mocking the actual actor as if he is the character Chris in the show. Repeated under each post are phrases from the show meant ironically like:

“You do not need it, your father has two jobs.”

“Who are all these white people?”

When he uploaded a photo of his new dog, the pic repeatedly received the comment “Negrito” (little nigger). Williams apparently used Google Translator to post a warning in Portuguese that he would begin blocking people, to which they responded with more spamming and the threat, “the zuera (trolling) never ends,”. Apparently, James has now made his account private.

This is a glimpse into how the representational impact of Black stories in Brazil. Afro Brazilians know “Everybody Hates Chris” as an unfiltered, satirical, smart, transgressive, and a bold example of how a people can use art to resist racism.

Contrarily, others see images of strong Black families as a threat.