This Day in History: March 19th 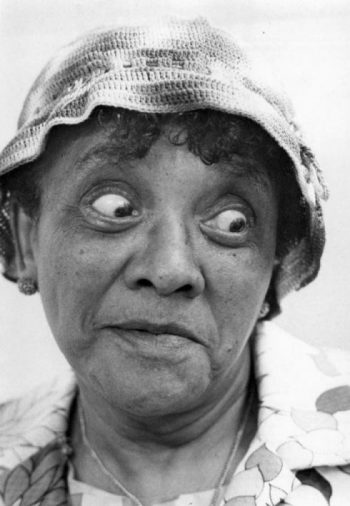 Mabley was one of 16 children born to James Aiken and Mary Smith. Her father was a successful businessman and volunteer firefighter who died in 1909 in a fire engine explosion. Her mother took over the family businesses, including the local general store. There wealth was reportedly a source of envy of neighboring whites. Her mom was mysteriously run over by a truck on on Christmas Day 1910 while coming home from church, leaving Mabley and her siblings orphaned and without means.

Mabley was raped several times, including once by a white sheriff when she was 13. She gave birth to two children by age 14. Both were given up for adoption.

She moved to Ohio to escape from her home life and got her first look at performers and their lives. Mabley decided to pursue a career in show business and joined the African-American vaudeville circuit, also known as the “Chitlin Circuit.” She started dating fellow performer, Jack Mabley, and adopted the name Jackie Mabley.

By the early 1920s, Mabley was gaining attention and performing at venues such as the Cotton Club and the Apollo Theater. She became the first female comedian to perform at the Apollo and would go on to make more appearances than any other performer in the theater’s history.

She modeled her stage persona largely on her grandmother, who was formally enslaved. She was also able to use her deep voice and style of clothing to enhance her routines. On-stage, Mabley presented herself as a sly older woman who provided commentary on racial issues and also made jokes about her taste for younger men. Mabley received the title of “Moms” after earning her reputation as a mentor and mothering figure.

Mabley started her recording career with the debut album The Funniest Woman Alive, which became gold-certified. Throughout her career, Mabley recorded many albums and made appearances on top variety shows including The Ed Sullivan Show.

For many years she served as the only female African-American comedian and made herself known to the world. Mabley even took her talents to the big screen and had roles in movies such as The Big Timers (1945), Boarding House Blues (1948), and the musical revue Killer Diller (1948), which featured musician, Nat King Cole.

Moms Mabley died on May 23, 1975, in White Plains, NY. Fellow comedian Whoopi Goldberg made her directorial debut with a documentary about Mabley titled “Moms Mabley: I Got Somethin’ to Tell You,” which aired on HBO in 2013