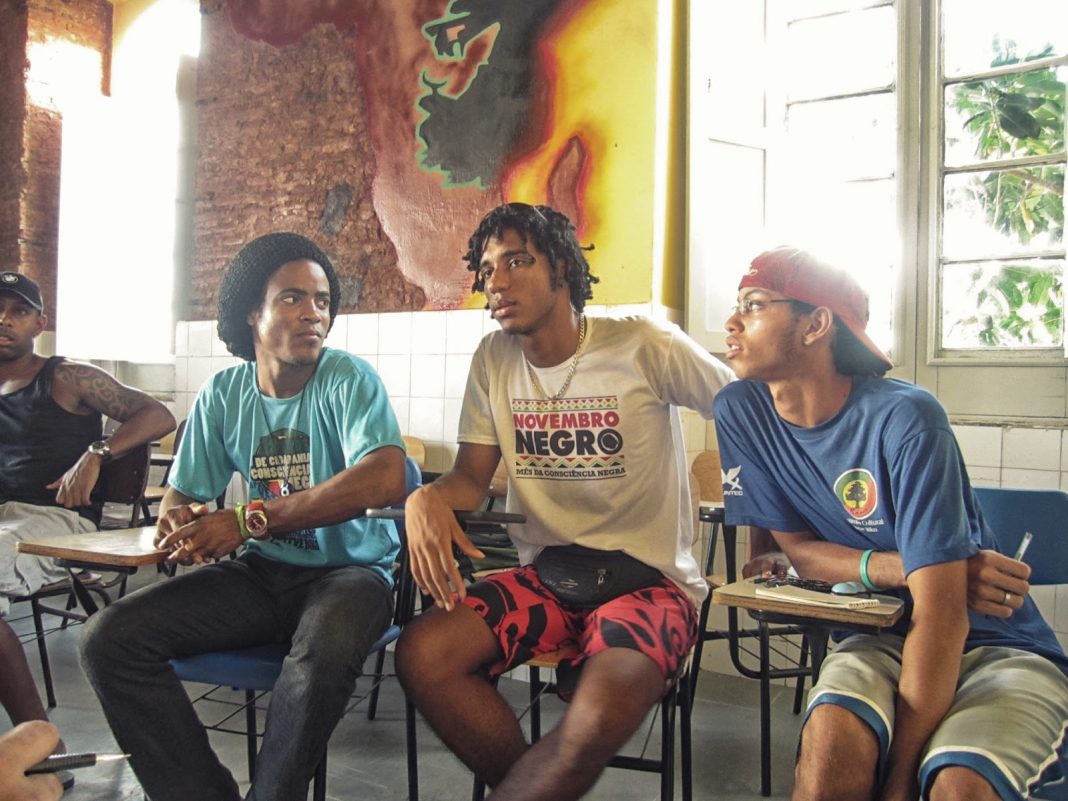 “Black Consciousness is in essence the realization by the Black man of the need to rally together with his brothers around the cause of their oppression.”

“That’s what revolutionary movements do, and I think that’s what diasporic identities are, and that’s often what freedom communities, whether they be maroon communities, or social movements,—the possibility of dwelling or inhabiting a place. It’s not about inheritance but it’s about creating conditions that make dwelling possible.“

When I look back at this photo of these young men, sitting in front of a large mural of Africa, all wearing Brazilian Black Movement tee-shirts, these two quotes by Saidiya Hartman and Bantu Steve Biko feel fitting. The place where these young men are sitting, discussing their future plans, is named after Biko, the South African revolutionary and anti-apartheird activist.

The Steve Biko Institute (affectionately known as Biko) is located in a large colonial building at the top of the hillside city center and tourist trap, Pelourinho.

Once the first slave market in the new world, Pelourinho is most known as a colonial backdrop where various artists, craftsmen, performers and vendors sell any and everything to tourists waiting to be served a very authentic Brazilian experience. A colonial-era town center, the name comes from the word “pillory” in Portuguese, referring to the pillories where enslaved Africans were whipped and displayed to discourage others.

Biko overlooks the spectacle like a wise owl. In the early 90s, a group of local Black movement activists created the institute in a strategic effort to revolutionize the racially discriminatory Brazilian educational landscape. They saw the militant pursuit of education as a priority. The Black Consciousness Movement of Biko served as the moral and philosophical backbone of the organization which officially opened in July of 1992 as Instituto Cultural Steve Biko. The official mission “Promote the political-social growth of the Black population through education and appreciation of their ancestry.”

Biko was the closest thing to a Historically Black College and University (HBCU) outside of the United States that I had seen so far on my journey. It was no surprise that Biko would provide cultural exchange programming for HBCU classes traveling to Brazil. They directly assist the largest and most disadvantaged social group, Black Brazilian youth.

Brazil’s stratified educational system sees private and military-themed secondary schools as the most funded and better-resourced on every level. They are also out of reach for the average Black family, who traditionally attend the underfunded, federally regulated public schools. These schools have far fewer resources, least of all the capacities to prepare high school students for the college entrance exams or “vestibulars”.  Inadequate schools and demanding social and personal circumstances leave many Black students underprepared for these mandatory exams. Additionally, preparatory programs by for-profit agencies are expensive. These same preparatory skills are included in private school education for upper-class white youth.

Biko calls its pedagogy Citizenship and Black Consciousness (CCN). They describe it as a group of methods which teach, “…self-esteem and the struggles of the black people in the fight against racism. In the discipline, students are led to rescue the Afro-Brazilian culture, highlighting the spirituality, the ancestry and history of activist references in the fight against inequalities. With this, Biko seeks to influence the posture and thinking of young blacks.”

There are three primary programs at Biko:

I was invited to Biko by a friend who knew that I was a graduate of Morehouse College, the largest men’s liberal arts college in the United States. Morehouse has graduated notable civil rights leaders like Martin Luther King Jr., Julian Bond and theologian Howard Thurman. Spike Lee, also a Morehouse graduate, recorded the infamous video for Michael Jackson’s “They Don’t Care About Us” only a few yards away from the Biko building in 1996.

The week before I arrived, the Bikud@s (students of The Steve Biko Institute) hosted a group from another HBCU and Atlanta University Center institution, Spelman College. Spelman is a women’s college which graduated notable Black Americans like Alice Walker and Stacy Abrams.

By far, the most famous HBCU graduate that has walked through Biko’s doors is one of their very own.  n 2010, former Bikud@s, Leonardo “Leo” Vieira graduated with a degree in Sociology from Morehouse College. Leo is a legend in the Biko community. Everyone asked if I knew him, but we missed each other on the red clay hill in Atlanta by six years. Biko’s international reach, and the hard work of founder and directors Silvio Humberto and Jucy Silva, among others, negotiated an international student agreement with the college which allowed Leo to attend. This was a rare thing, but a  sign of the potential embedded in Black political education and organizing.

I am very grateful for the opportunity and support of @icstevebiko who believed in me to overcome this challenge, even without fluent English. I also thank Dr. Ida Mukenge, Dr. @silviohumberto_ , Profa. @s_jucy and todxs the other people who directly and indirectly were responsible for the success of this great project.

Thank you very much! With gratitude.”

The students asked me for tips on their applications to Morehouse. They swelled with hope that they would follow in Leo’s steps. Unfortunately his path was rare and likely only possible through the perfect alignment of bureaucracy, budgeting, and political capital.

Instead I told them about how I was the first person in my family to attend college. I described my tiny, beach traffic hometown, which reminded them of a nearby village, Cachoeira. And I told them about my grandmother who was a domestic worker (maid and nanny) who, on the day I left for Atlanta, gave me the $200 she’d been saving up. I also told them of the mountain of loans required for me to achieve this dream of a quality education, and the list of other obstacles. This was all to say that I understood where they were and that we are involved in a shared struggle.

This was also the beginning of a long relationship. The young man in the hat in the main photo is Alex. He and I have developed several community projects over the years and together are building the Atlantic Archives Lab to connect working class Black Atlantic communities. To learn more, sign up here: https://www.sedmiles.com/atlantic-archives

To my knowledge, there have been two other Bikud@s who have gone on to study in the States at HBCUs. But the impact of The Steve Biko Institute on preparing and guiding Black Brazilians of all ages into universities all over the world, is incalculable. Black Americans seeking diaspora connections in Brazil must visit Biko early in their visit. Their transnational, Pan African philosophy is a bridge, as well as a critical lens to view the immense Black world of Brazil.

The Steve Biko Institute should be one of the first places on your list to visit in our post pandemic future. To donate click here https://www.stevebiko.org.br/doe .