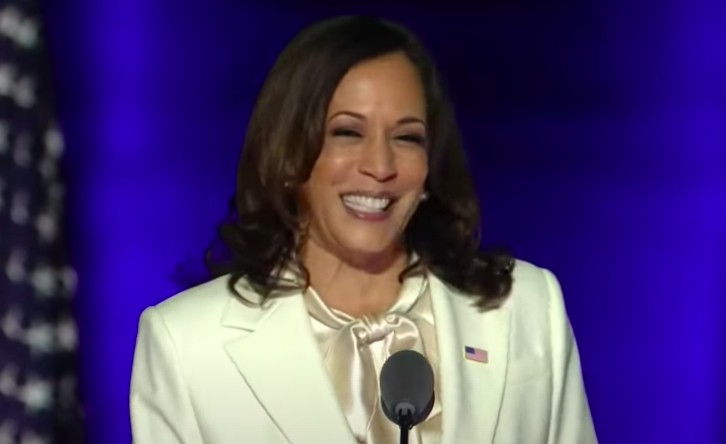 This month is Women’s History Month, and in celebration, The Hub will be spotlighting many of the inspirational women who help make our world a little safer, brighter and progressive.

We’re kicking off our Women of Power list with Vice President Kamala Harris.

Harris was born in Oakland, California on Oct. 20, 1964. She is the eldest of two children born to her mother, Shyamala Gopalan, a cancer researcher from India, and Donald Harris, an economist from Jamaica.

After high school, Harris attended the prestigious HBCU Howard University in Washington, D.C., where she majored in political science and economics and joined the Alpha Kappa Alpha sorority.

In several interviews, Harris attributes her success to her parents, especially her mother, for raising her to be a confident Black woman.

“My mother understood very well she was raising two Black daughters. She knew that her adopted homeland would see Maya and me as Black girls, and she was determined to make sure we would grow into confident Black women,” she wrote in her 2018 autobiography, “The Truths We Hold.”

During Donald Trump’s term as president, Harris took every opportunity to hold the former POTUS and his allies accountable — something members of his own party were afraid to do. But her fierce determination and steady moral compass earned the respect and support of those watching.

The momentum led her to announce her bid for president in January 2019. After delivering a stellar campaign, Harris eventually pulled out of the race in December of the same year… and immediately became the front-runner for VP.

On Jan. 20, millions of people from around the world tuned in to watch Harris’s inauguration. Just three days prior, Harris posted a tweet acknowledging the long road ahead to undo and repair the damage inflicted by the previous administration.

“Our country is on a path to heal and to rebuild,” she tweeted. “Of course, that doesn’t mean the road ahead is going to be easy. Our nation continues to face challenges, from the coronavirus pandemic to this economic recession, from our climate crisis to a long-overdue reckoning with racial injustice, to healing and strengthening the democracy that we all cherish.”

Harris, a Black woman, is one of the most influential women in the world — and she deserves to be on this list.