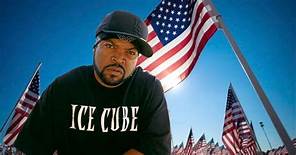 Last year, Ice Cube received a lot of flak after announcing that he’d teamed up with the Trump administration to create his Contract With Black America.

The contract is a 13-part plan to tackle several crucial issues affecting the Black community, including police and prison reform and interest-free loans for homeownership.

During a recent interview with “The Breakfast Club,” Cube shared that the work is still underway.

“We’re doing a lot of stuff behind the scenes, out of the public’s eye, because things get misconstrued when people chime in and they don’t know what they’re talking about,” he explained. “We’ve got some interesting things we’re going to announce as soon as they develop. I just want to take it away from all the noise being made and really get some concrete things done, instead of all this talk and trolling back and forth.”

“I see some progress being made, but the rubber’s still got to meet the road. What I learned with these companies is they talk a good game. They like to put out releases talking about how much money they’re contributing to these programs of diversity, but it’s all just press release stuff; when you really look into it, they’re doing nothing,” he added.

The furor over the contract has since died down. However, last year, the Black community slammed Cube for working with Trump — who he showed very little respect for during his sole term in office.

Cube denied making a beeline for the Republicans.