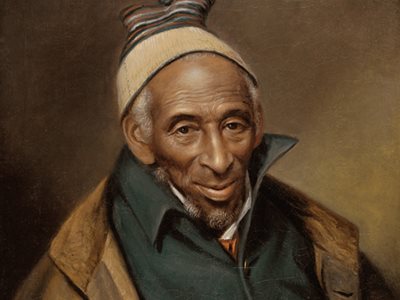 There’s a good chance that the name Yarrow Mamout doesn’t ring a bell when you hear it (hat tip, if it does). But it should. The story of Mamout, a Muslim slave born in Guinea and brought to America in the 1752 at the age of 16, is a compelling one. Not only was he able to read and write in Arabic and write his name in English, but after being enslaved for 44 years, Mamout purchased his freedom at the age of 60, and went on to become an entrepreneur, financier and property owner in Washington D.C.’s Georgetown neighborhood.

In his biography “From Slave Ship to Harvard: Yarrow Mamout and the History of an African American Family,” James H. Johnston describes how Mamout was revered as a top-tier brick maker who earned a substantial amount of money for his work and also specialized in making charcoal, loading ships and weaving baskets, notes the Washington Post. He eventually earned enough money to purchase property at Dent Place in Georgetown, own stock in the Columbia Bank of Georgetown and lend money to merchants.

Mamout gained so much prestige in Georgetown that two artists—Charles Willson Peale, who painted portraits of leading figures of the American Revolution and James Alexander Simpson, who went on to become the first professor of drawing and painting at Georgetown University—painted portraits of the former slave-turned-businessman.

Meet Yarrow Mamout, an African Muslim slave that lived in Washington, DC. He was set free in 1807 and became one of the first shareholders of the second chartered bank in America, the Columbia Bank. Two portraits of Yarrow done by well known artists survived. Know your facts. pic.twitter.com/dhDEBIQkzx

Mamout’s story may not have made the rounds like other slave narratives have, but it speaks to facets of slave life, Muslim identity in America and black entrepreneurship that we could all stand to learn more about.

The immigrant experience facing Muslims in this country is far from new, nor are the conflicts that confront blacks on a daily basis. However, Mamout’s prosperity at a time when his circumstances set him up for failure at every turn proves that the impossible is never really…impossible.

The murder of George Floyd by Minneapolis police on May 25, 2020, has become a global spark. Floyd has become a symbol...
Read more