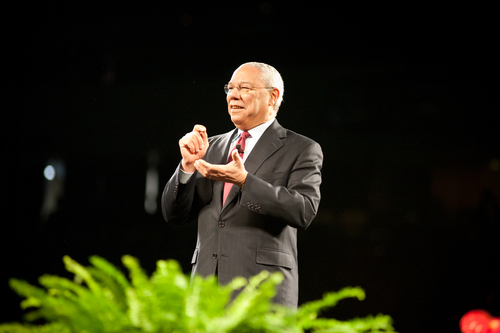 Colin Powell, the first Black US secretary of state, has died from complications from Covid-19.

He was 84 and fully vaccinated.

“General Colin L. Powell, former U.S. Secretary of State and Chairman of the Joint Chiefs of Staff, passed away this morning due to complications from Covid 19,” the Powell family wrote on Facebook. “We have lost a remarkable and loving husband, father, grandfather and a great American.”

According to CNN, a source shared that Powell had multiple myeloma, a cancer of plasma cells that suppresses the body’s immune response.

Colin Luther Powell was born in Harlem, New York City, on 5 April 1937, the son of Jamaican immigrants. Powell joined the Reserve Officers Training Corps (ROTC) while still a student at the City College of New York. He graduated in 1958 and was commissioned as a second lieutenant in the U.S. Army.

After serving in the military, which included a stint in Vietnam, he became the first Black national security adviser during Ronald Reagan’s presidency. He was also the youngest and first African American chairman of the Joint Chiefs of Staff under President George H.W. Bush.

“I think it shows to the world what is possible in this country,” Powell said during his Senate confirmation hearing. “It shows to the world that: Follow our model, and over a period of time from our beginning, if you believe in the values that espouse, you can see things as miraculous as me sitting before you to receive your approval.”

Though popular, Powell often faced scrutiny from the media. His heavy-handed military style was dubbed the “Powell Doctrine.” Powell faced criticism when the U.S. invaded Panama in December 1989, ousting the dictator, General Noriega. The United Nations condemned the move.

Powell was also criticized for not pushing harder to prevent the Iraq War. Under Bush’s advisement, the general had asserted that Iraq possessed chemical, biological and perhaps even nuclear weapons. After an invasion, no such weapons were found. More than 100,000 Iraqi’s were killed during the war.

“It’s just like in the military — you argue, you debate something, but once the president has made a decision, that becomes a decision for the Cabinet,” Powell said on CNN’s “Larry King Live” in July 2009.

Powell, a loyal Republican, began to grow weary of the directions his party was heading in and used his clout to help elect Democrats to the White House, most distinctly Barack Obama.

He was also very vocal in his opposition to Donald Trump’s policies.

“The one word I have to use with respect to what he’s been doing for the last several years is the word I would never have used before, never would have used with any of the four presidents I worked for: He lies,” Gen. Powell said on CNN’s “State of the Union” show. “He lies about things, and he gets away with it because people will not hold him accountable.”

He and his wife, Alma Powell, had three children, Linda, Annemarie and Michael. Michael Powell. After retiring from public service, Powell went on to become the founding chairman of the non-profit, America’s Promise.