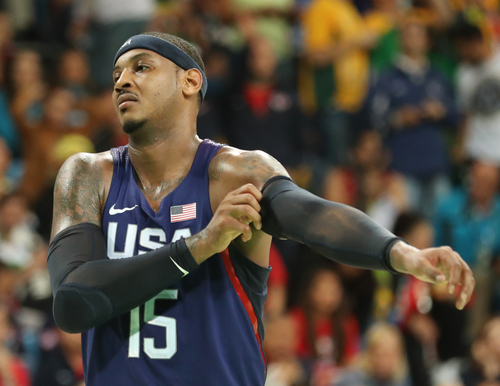 NBA star Carmelo Anthony believes that athletes are more susceptible to suffering from depression than most.

Anthony shared his beliefs during a recent interview with “The Drew Barrymore Show” in promotion of his new book, “Where Tomorrows Aren’t Promised: A Memoir of Survival and Hope.”

“I think athletes, like, we’re naturally depressed being an athlete. I mean, what we have to go through on a day-to-day basis, dealing with media, competing at the highest level,” the 10-time NBA AllStar told Barrymore.

“We spend more time with our teammates than we do with our family during the year, so you miss holidays and so on and so forth. So it’s a lot of things that, you know, the average person [doesn’t] really understand that an athlete has to go through.”

“It wasn’t until I actually started writing the book and going through that process where I was able to kind of get the real, true meaning of, kind of, who I am and putting everything into perspective,” he continued.

Anthony’s opinions can be backed up with data.

According to Athletes for Hope, “up to 35% of elite athletes suffer from a mental health crisis which may manifest as stress, eating disorders, burnout, or depression and anxiety.”

Anthony’s book is part of an ongoing campaign to raise awareness around the issue.

In March, which is Mental Health Awareness Month, Anthony teamed up with NBA stars Chris Paul and Dwyane Wade and Bold.org to help launch a scholarship fund for two Black students pursuing careers in the mental health field or related field.

“This scholarship is just one step forward in eliminating the barriers that exist to mental health care and education and communities of color,” Wade said at the time.