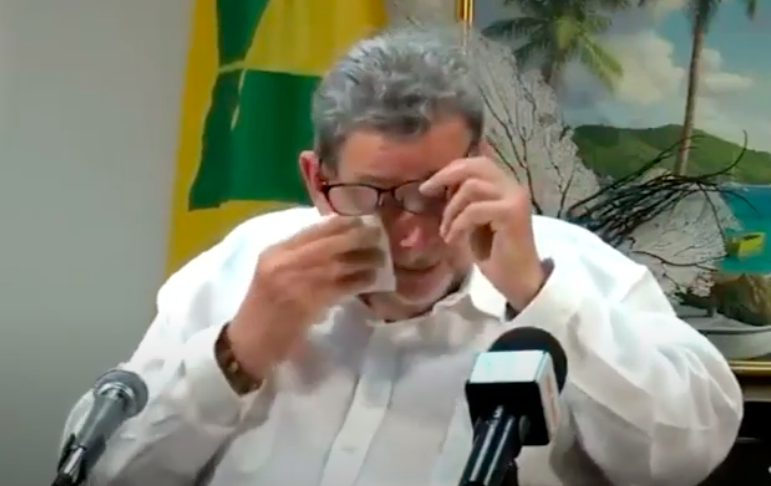 Prime Minister Ralph Gonsalves tearfully thanked his fellow Caribbeans for their support after the La Soufrière volcano devastated a considerable portion of the island.

According to officials, the ash column is reported to have risen as high as 20,000 feet into the air.

“I’ve spoken to one of the cruise lines leadership this morning, and,” Gonzalves said during the news conference. He then paused to wipe away his tears, overwhelmed by the camaraderie displayed by the island’s neighboring nations.

“You know I must tell you the way in which people in St Vincent and the Grenadines and in ordinary people, and in Grenada and in Dominica, St Lucia, and Antigua, have responded to put people in their homes…strangers. Bring tears to my eyes. I love this Caribbean.”

Gonzalves added that two Royal Caribbean cruise ships and two Carnival cruise ships would arrive on the island by Friday. He urged evacuees to receive the COVID-19 vaccination before boarding the cruise ships.

Last week, Jamaican Prime Minister Andrew Holness announced the island would be providing assistance to St. Vincent and the Grenadines.

In a statement from his office, Holness said he had spoken with Gonsalves on to “express solidarity with the government and people of St Vincent and the Grenadines during this challenging time, and to assure him of Jamaica’s readiness to provide assistance.”

Holness declared that Jamaica’s Disaster Assistance Relief Team (DART) is on standby, should they need to be deployed to the eastern Caribbean island.

According to UNICEF, between 16,000 and 20,000 people, including children, have been evacuated. At least 1,000 displaced families are expected to require immediate economic assistance. The charitable and governmental agencies have banded together to erect 62 shelters on the island, hosting at least 3,200 people.

Professor Richard Robertson of the University of the West Indies Seismic Research Centre explained what caused the explosion.

“The volcano overnight had gone into continuous tremor where essentially it was shaking at the summit all the time. So we moved from banded tremor to continuously tremoring, and then at about 8.37 this morning, we started to see a signal and the signal slowly grew in amplitude. It increased the size of the shaking or the amount of shaking, and then by 8.41, people realized there was an explosion.”

“Today is the 42nd anniversary of the 1979 explosion and in true fashion, La Soufriere bellowed out another explosion at 6am on Saint Vincent and the Grenadines,” Josie Gonsalves, an adjunct professor from City University of New York, said in a statement to TheHub.News.

“We are still in a heightened state of a full disaster. I am heartened by the outpouring of the resources from our Caribbean, Latin American, and other UN global partners,” she said, adding that the island faces a “herculean road ahead to address ecological and environmental sustainability.”

Gonsalves then made a call for donations: “We are without staples like water, medicines, food, and so much more,” the statement concludes.

Below are several charities you can support to aid St. Vincent evacuees.

Is There Not a Cause (ITNAC)