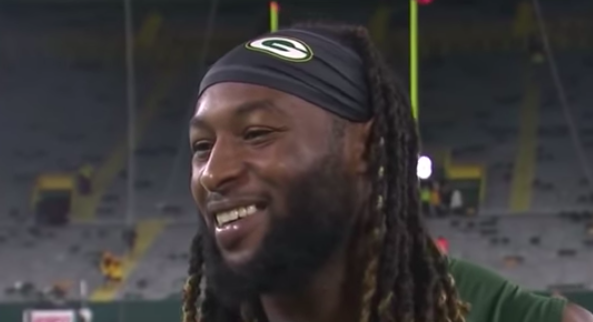 Aaron Jones had a game to remember last night on Monday Night Football against the Lions.

The Packers’ star running back went off, bludgeoning Detroit for 4 TDs.

Some might question his performance outside of his touchdowns as he garnered 67 yards rushing and 48 yards receiving.

Covid robbed Aaron Jones of his father, Alvin, in April, so he dedicated the season to him.

“I think he’d be very proud of me, tell me to continue to work and this is only the beginning,” said Jones to Lisa Salters after the game.

The Lions had no answer for Jones and the Packers, who ran the ball down their throats all night.

Jones was more than ready and had something special planned for his first game back at Lambeau Field after his father’s passing.

“I actually have a chain with a football and his ashes are in it. I scored and it fell off in the endzone,” said Jones. “I’ll go look for it, but I know he’d be happy. He’d be like ‘if you lose it anywhere, lose it in the endzone.’”

On Monday, December 22nd, 2003, only a day after his father passed away, Favre went off on the Oakland Raiders.