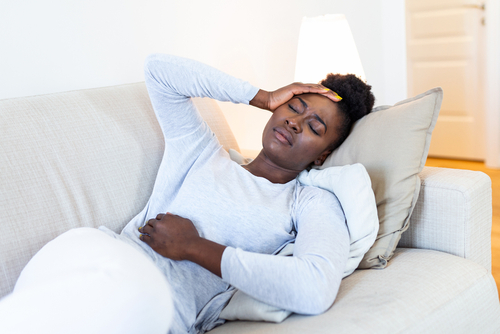 Stacy Graham-Hunt
Stacy Graham-Hunt,@StacyReports, is a national-award winning columnist and author, who writes about race, culture and identity. She is passionate about Black people telling their own stories. Buy her book, “Processing Pain.”

I had my first ultrasound when I was pregnant with my first son, Alexander, four years ago. The technician rubbed my belly with a cold, lubricated wand while she watched a monitor.

“You have some small fibroids,” she said.

This was the first time that I’d ever heard this. I became one of the 260 million American women living with noncancerous tumors in their uteruses. The technician went on to say that fibroids were more common in African-American women. Small ones, like mine, rarely caused problems during pregnancies, as long as they didn’t grow. The technician made the tumors seem like they were no big deal, but I beat myself up.

I blamed myself for abandoning my vegetarian, and sometimes vegan, diet after eight consecutive years. When I was pregnant with Alexander, I had strong cravings for chicken, and I’ve been eating meat ever since then.

I believed naturopathic doctors and herbalists like Queen Afua, Krystal Alkaline Doula, Dr. James Dail, and Dr. Sebi, who indicated that eating and drinking meat and dairy products could cause fibroids to grow inside a woman’s body. My traditional gynecologists and midwives have never openly associated the consumption of animal products with fibroids.

Thankfully, the fibroids got smaller during the pregnancy, and I was able to have a vaginal birth. When I was pregnant with my second son, Elijah, they were still there, but again, they did not affect my pregnancy, thankfully.

Continue reading over at stacygrahamhunt.com

This content has been brought to you by staceygrahamhunt.com in partnership with TheHub.News. Stacy “writes about her everyday experiences as a Black woman living in, working in, and growing up in Connecticut.“