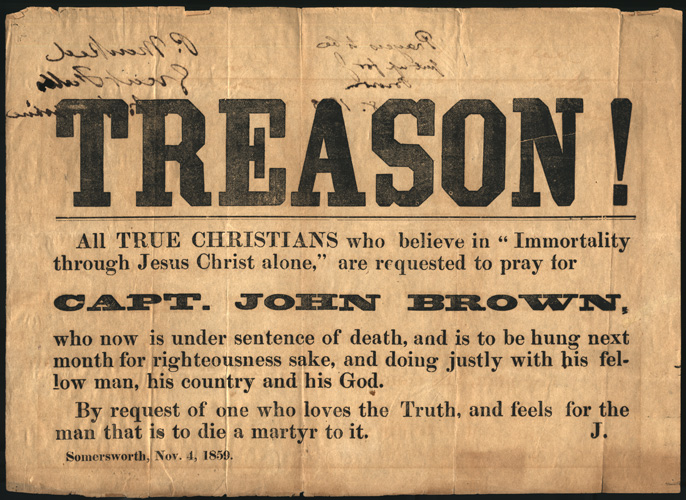 On October 16, 1859, abolitionist John Brown, and more than 15 men led an insurrection in Harper’s Ferry, West Virginia. Lewis Washington and John Allstadt, who held people in bondage, were taken as hostages and their enslaved were freed by Brown and his men.

Brown was born in Torrington, Connecticut but he spent most of his childhood in Ohio. In 1855, after assisting in the escape of several enslaved, Brown and his five sons moved to Kansas where he appointed himself “captain” of the antislavery forces. Brown succeeded in gathering a small group of insurrectionists (which included three of his sons) whose mission was to cause an uprising and rebellion among the enslaved.

Brown began preparing for the two-day insurrection in early July of 1859 when he first arrived at Harper’s Ferry and rented a small farmhouse in the area. The goal of the operation was to capture supplies and use them to arm enough men for a slave rebellion.

During the second day, word of a slave revolt began to spread through neighboring towns and local militia units began to take positions surrounding Brown’s men and cut them off from various escape routes. By the end of the second day, confederate Colonel Robert E. Lee and 90 U.S. Marines arrived at Harper’s Ferry by train from Washington, D.C.

On October 18, 1859, Brown refused to surrender but he was overrun by the forces under the command of Col. Lee. Brown was wounded and captured by the end of the insurrection. Overall, 16 people were killed in the raid, 10 of them included Brown’s men. John Brown, Aaron Stevens, Edwin Coppoc, Shields Green and John Copeland were all taken to jail in Charles Town, Virginia.

Brown faced murder charges, conspiring with slaves to rebel and treason against the state of Virginia. The trial began shortly after the takeover of Harper’s Ferry in late October and during his defense, Brown attempted to convey to his supporters and sympathizers that he was a selfless religious martyr.

It was popular for individuals in the North to express support for John Brown; he was even backed by Henry David Thoreau in the essay, “Plea for Captain John Brown.”

Ultimately, Brown was tried and convicted of treason. He was sentenced to death by hanging on December 2, 1859.