This Day in History: January 7th 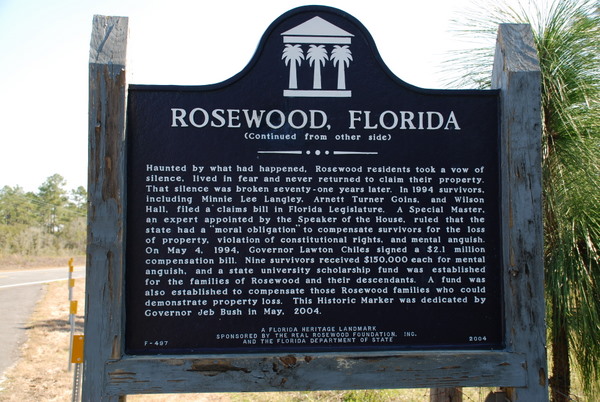 On January 7, 1923, the all-Black town of Rosewood, Florida, was attacked and burned to the ground by a white mob. The massacre would last a week and completely destroy the town and cost several people their lives.

On January 1, 1923, in Sumner, Florida, 22-year-old Fannie Taylor was found covered in bruises and claimed a black man had entered the house and assaulted her. The incident was reported to the town Sheriff, Robert Elias Walker.

Taylor’s husband, James Taylor, escalated the situation by assembling a mob of white residents and seeking the help of whites in neighboring counties. The mob also consisted of a group of Ku Klux Klan members who were attending a rally in a nearby town. Once the mob assembled, the men searched the area for any black man they could find.

While the mob was on the hunt, law enforcement officials were alerted that a black prisoner named Jesse Hunter had escaped from a chain gang, which immediately made him a suspect to the police. The mob focused on finding Hunter, but there was also a group of searchers that were led to Rosewood and the home of Aaron Carrier. Carrier’s aunt, Sarah, did laundry for the Taylor’s. Once the assailants reached Carrier, he was dragged out of his home, tied to a car and taken back to Sumner, where he was beaten.

Fortunately for Carrier, Sheriff Walker intervened and placed him in protective custody. However, blacksmith Sam Carter was not as fortunate. Carter was suspected of hiding Hunter and a group of attackers tortured him until he agreed to take them to the hiding spot. Hunter was not at the hunting spot so someone in the mob shot him and his body was hung on a tree.

On January 4th, the armed mob surrounded the home of Sarah Carrier, believing that she was now hiding Hunter. The standoff lasted overnight before Carrier and her sons were murdered . The violence pursued and many Rosewood residents fled to nearby towns to avoid the attacks. The mob began to disperse in the following days, but on January 7th, some returned to Rosewood to completely destroy the town, burning it to the ground.

Most surviving residents did not return to Rosewood out of fear and the events that took place faded away from the public eye quickly.

The late movie director John Singleton brought the massacre back to the forefront in his 1997 film, Rosewood.