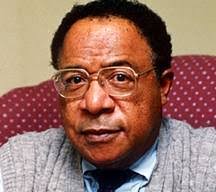 With works such as Roots and The Autobiography of Malcolm X, journalist and author Alex Haley was able to capture the essence of African-American life. The renowned author was born to Simon and Bertha Haley on August 11, 1921, in Ithaca, New York.

Born in New York, Haley moved to Tennessee with his family and soon discovered his interest in story telling. While growing up in Tennessee, Haley’s grandmother would tell him stories about their family’s ancestry and relatives going back more than five generations. The family would have to relocate again after the death of Haley’s mother.

After graduating high school and dropping out of college, Haley enlisted in the U.S. Coast Guard. It was during this time with the Coast Guard that he taught himself the skill of writing and would often write letters for his shipmates to alleviate his boredom. He expanded his reach and began writing short stories. It took eight years for small magazines to start accepting some of his pieces.

In 1945, Haley continued working on his craft after being assigned to a role in public relations for the Coast Guard. After writing a piece that impressed an admiral with whom Haley worked, he was named Chief Journalist, a position created just for him. By 1956, Haley began to focus his articles on issues of interest to black audiences.

Haley ended his 20-year career and retired from the Coast Guard, but he continued to write and served as a senior editor at Reader’s Digest. He also established the “Playboy Interview,” where he spoke with cultural icons and it became an important part of the magazine. He interviewed figures such as Miles Davis, Jim Brown, Martin Luther King Jr., and Malcolm X.

The interview with Malcolm X was the start of their developing relationship. Haley collaborated with the activist to write The Autobiography of Malcolm X. The book was published in 1965 and became a huge success. Time magazine named it one of the 10 most important nonfiction books of the 20th century.

Following the book’s success, Haley began traveling three continents tracing the lineage of his mother’s family. This would be the basis for what would become one of his most known works. The book, Roots: The Saga of an American Family was published in 1976 and became a No. 1 national bestseller. It was so popular that a miniseries was developed and televised in 1977, which also broke ratings records at the time. There was even a remake in 2016.

By the end of the 1980s, Haley was already working on a second historical novel based on another branch of his family. He was unable to finish writing Queen: The Story of an American Family, but requested that the book be completed by David Stevens. His novels and the Roots miniseries were able to spark many conversations about racism and slavery in America.

On February 10, 1992, Alex Haley died of a heart attack in Seattle, Washington.