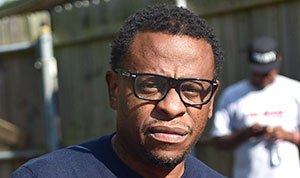 Houston rap icon Brad Jordan aka Scarface is recovering from what he called “an experience worst than death.” He has tested positive for the Coronavirus.

“I have been shot. I have been in bad car accidents but this right here (#COVID19) got my attention!” said Jordan in a phone interview from his home. “It has my undivided attention. If I can save somebody’s life by letting them know that this SHIT is real, I’m telling them…This shit is real!”

Jordan, best known as a member of the Geto Boys who ran for City Council of District D in Houston, said he has been home since Kobe Bryant died in a helicopter accident the end of January.

“I haven’t been anywhere,” he told me. “So I have no idea how I got infected.”

He said he seems to get the flu every year around that time, so he didn’t think anything of it until his symptoms started getting worse. It went from a bad cough to a fever to vomiting violently. Jordan went to the hospital and they gave him antibiotics. He ended up back in the hospital when his lungs started filling with fluid.

“They gave me intravenous antibiotics; my kidneys failed,” he said through labored breathing. “I went through three weeks of pure fucking torture. That was death.”

He says he feels much better and he wants to get the message out that Coronavirus is for real. It’s not a hoax.

Cuba may have found a cure for COVID-19. On March 2, the island instituted the Novel Coronavirus Plan for Prevention and Control, which regulates...
Read more
Diaspora

The United States Senate unanimously passed the $2 trillion stimulus package Wednesday night, which will is expected to bring some relief as COVID-19 continues...
Read more
- Advertisement -