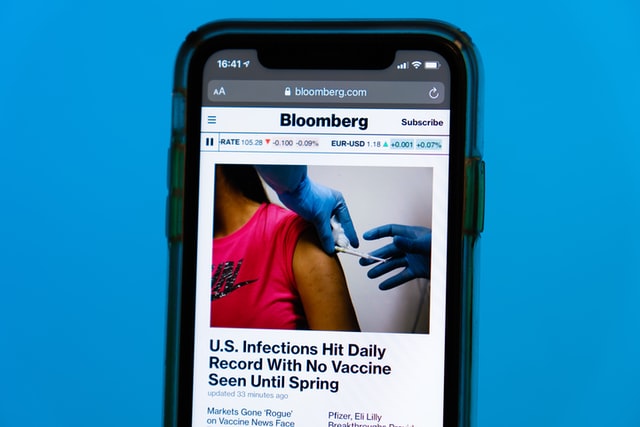 This week the Biden administration ruled out the introduction of mandatory vaccine passports at the federal level, but this has not stopped private companies from developing COVID-19 tracking systems.

“The government is not now, nor will we be supporting a system that requires Americans to carry a credential. There will be no federal vaccinations database and no federal mandate requiring everyone to obtain a single vaccination credential,” Press Secretary Jen Psaki told reporters at a briefing.

According to ACLU policy analyst Jay Stanley, smartphone-based vaccine passport apps “raise a lot of questions” around privacy and could ultimately lead to a “two-tier society.”

Stanley says the best way forward is to adopt a “herd immunity” approach.

“So, first of all, the main push for our country really needs to be trying to get to herd immunity, so that COVID becomes another disease, like measles or others, where we just don’t have to worry about it on a daily and hourly basis,” Stanley explained to Democracy Now. “Nobody is running around asking us for our measles vaccination certificates left and right. And we want to get to the same point with COVID. That should be the number one goal. And this should be really a sideshow.”

The Trump administration tried to implement a “herd immunity” strategy secretly, but its lack of transparency led many to distrust its motives. In December, an email leaked of a Trump appointee repeatedly urging top health officials to adopt a “herd immunity” approach to COVID-19 and allow millions of Americans to be infected by the virus.

“[I]t may be that it will be best if we open up and flood the zone and let the kids and young folk get infected” in order to get “natural immunity…natural exposure,” then-science adviser Paul Alexander wrote on Jul. 24 to Food and Drug Administration Commissioner Stephen Hahn.

This was not the message being conveyed to the public by government officials. Needless to say, it did not help to ease the fears of the nation’s more cautious citizens. Such distrust may have left some American citizens reluctant to sign up for the jab, and rolling out the controversial digital passports could further isolate vulnerable members of society.

A vaccine passport could allow the holder entrance to a venue or a foreign country that demands proof of vaccination in addition to a visa and valid national passport.

Some argue that vaccine passports have existed for years, with many countries requiring travelers to provide proof they have received specific jabs before granting visas. The international vaccine certificate developed by the World Health Organization for yellow fever and malaria has been around for decades.

But considering the devastating impact of the coronavirus, the COVID-19 vaccine passport would likely prove to be far more intrusive.

“In the age of the smartphones, it would be convenient and just make sense to have an electronic version of this that you can have on your phone. But that raises a lot of questions,’ Stanley explained. “The first one is equity. A lot of people, 15% of the country, do not have smartphones, disproportionately some of our most disadvantaged people. Forty percent of people over age 65 don’t have smartphones. People with disabilities, low-income people are disproportionately lacking in smartphones. And so, if you create a system that relies on having a smartphone, you’re going to create the kind of two-tiered society that you were quoting people as talking about.”

The ACLU is not alone in their disapproval of a rollout.

Several states have already either banned or express its intention to oppose the document. On Wednesday, the governor of Idaho signed an executive order to ban the state from mandating or issuing vaccine passports—joining Texas, Florida and Utah.