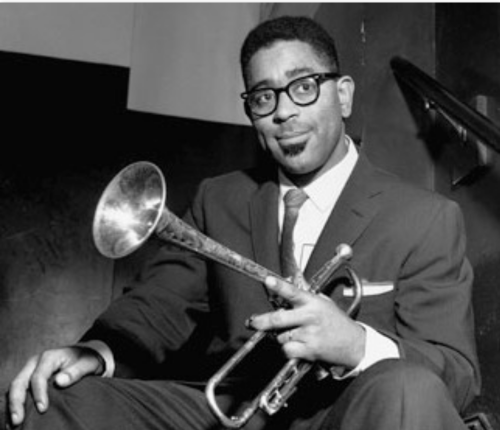 John Birks Gillespie was born on October 21, 1917, in Cheraw, South Carolina. Gillespie moved with his family to Philadelphia, Pennsylvania where he joined the Frankie Fairfax Orchestra and relocated to New York City shortly after.

Gillespie got the name “Dizzy” from his unpredictable and joking personality. He performed with Teddy Hill and Edgar Hayes in the late 1930s and made his recording debut on Hill’s version of “King Porter Stomp.”

Dizzy Gillespie played in a number of bands, including those led by Cab Calloway, Ella Fitzgerald, Earl Hines, Duke Ellington and Billy Eckstine. He was known for his swollen cheeks and signature trumpet’s bell.

While working as a bandleader, Gillespie along with Charlie Parker, developed the musical genre known as “bebop,” which is a reaction to the swing genre and is distinct for dissonant harmonies and polyrhythms.

In addition to creating bebop, Gillespie is considered one of the first musicians to infuse Afro-Cuban, Caribbean and Brazilian rhythms into contemporary jazz. His work in the Latin-jazz genre includes “Manteca,” “A Night in Tunisia,” “Guachi Guaro” and other recordings. He called the Cuban-Jazz fusion, “Cubop.”

Gillespie created and formed his own big band and performed from 1946 to 1950. The band was regarded as one of the best large jazz ensembles. His best-known works from that time period include songs such as “Oop Bob Sh’ Bam,” “Groovin’ High,” “Leap Frog,” “Salt Peanuts” and “My Melancholy Baby.”

He went on to form other bands throughout the remainder of his career, but he mostly performed with small groups following the 1950s and continued to make high-level performances and recordings. He was an active musical ambassador and led several overseas tours sponsored by the U.S. State Department to travel the world extensively and share his knowledge with young aspiring artists.

During his last few years, Gillespie served as the leader of the United Nations Orchestra. Gillespie’s memoir “To BE or Not to BOP: Memoirs of Dizzy Gillespie” was published in 1979. More than a decade later, in 1990, he received the Kennedy Center Honors Award.

Gillespie died on January 6, 1993 at the age of 75, in Englewood, New Jersey. His legacy can best be summarized in a statement made by Gillespie himself: “The music of Charlie Parker and me laid a foundation for all the music that is being played now…Our music is going to be the classical music of the future.”