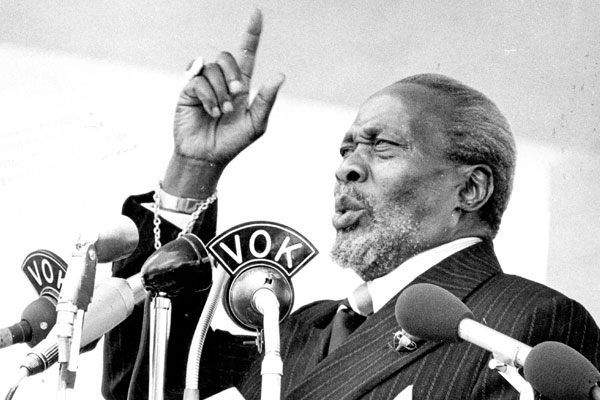 Jomo Kenyatta, Kenya’s first president, was born on October 20, 1891, in Ngenda, Kenya. He was born Kamau Ngengi to a chief of a small Kikuyu agricultural settlement, one of five administrative districts in the Central Highlands of British East Africa.

At the age of 10, Kenyatta became seriously ill with jigger infections in one of his legs. He successfully underwent surgery at the Church of Scotland mission and became fascinated with Europeans and what he saw during his rehabilitation.

After running away from home to become a resident at the mission, he began working as a cook and houseboy for a white settler to pay his school fees. While at the mission, Kenyatta studied many subjects such as the Bible, English, mathematics and carpentry. He completed his mission school education in 1912 and was baptized by the Church of Scotland mission in 1914.

He took the name John Peter Kamau after his baptism but quickly changed it to Johnson Kamau. He eventually left the mission to move to Nairobi seeking employment and work as a carpenter. However, as World War I progressed, Kenyatta moved to Narok hoping to avoid being drafted. Around this time, he began wearing a traditional belt known as a “Kenyatta,” which means “light of Kenya” in Swahili.

Kenyatta got a job working as a clerk in the Public Works Department and transitioned into politics full-time in 1928. He launched a monthly newspaper aimed at gaining support from all sections of the Kikuyu people and called for self-improvement.

He collaborated with other African nationalist students in England and founded the Pan-African Federation with Kwame Nkrumah in 1946. He returned to Kenya and became president of the Kenya African Union the same year.

During the Mau Mau uprising in 1953, Kenyatta was imprisoned by the British, labeled as one of the group’s organizers and sent into exile in 1959. He was elected president of the newly founded Kenya African National Union while being in exile, but he was released in 1961 to participate in negotiations with the British to write a new constitution for Kenya.

Kenya became independent in 1963 and it became a republic in 1964 with Kenyatta as its first president. Kenyatta was intolerant of dissent in Kenya and outlawed some of the opposition parties that developed. Kenya’s stability under Kenyatta attracted many foreign investments and saw a time of economic growth. Jomo Kenyatta died on August 22, 1978, in Mombasa, Kenya.