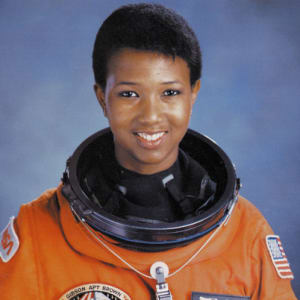 Physician and astronaut, Mae Carol Jemison, was born on October 17, 1956, in Decatur, Alabama. In 1992, Jemison made history when she became the first African American woman to travel in space.

The doctor, engineer and NASA astronaut knew that she wanted to study science at a very young age and was determined to travel to space one day. Jemison attended Stanford University in California and served as president of the Black Student Union.

She graduated in 1977 with a Bachelor of Science degree in Chemical Engineering and a Bachelor of Arts degree in African and African-American studies. After graduating from Stanford University, Jemison attended Cornell Medical School and traveled to Cuba to lead a study for the American Medical Student Association.

After working as the area Peace Corps medical officer for Sierra Leone and Liberia, teaching and conducting medical research, Jemison returned back to the United States in 1985. Jemison made a career change and decided to pursue her childhood dream and applied for admission to NASA’s astronaut training program.

She flew aboard the Endeavour on mission STS47 on September 12, 1992, with six other astronauts, making Jemison the first African American woman in space. In total, she spent more than 190 hours in space before returning to Earth. During her time in space, Jemison conducted experiments on weightlessness and motion sickness on the crew and herself.

Jemison left NASA in 1993 after working as an astronaut for six years. She started The Jemison Group, a consulting company that encourages science, technology and social change. She started teaching environmental studies at Dartmouth College and directed the Jemison Institute for Advancing Technology in Developing Countries.

Jemison even got involved in acting and became the first real astronaut to be on an episode of Star Trek: The Next Generation.

In 1994, Jemison created an international space camp for students 12-16 years old called The Earth We Share (TEWS) and she created a nonprofit organization, Dorothy Jemison Foundation for Excellence.

Jemison has received numerous awards and accolades for her work in the sciences. In 2001, she released a children’s book about her life titled, Find Where the Wind Goes.