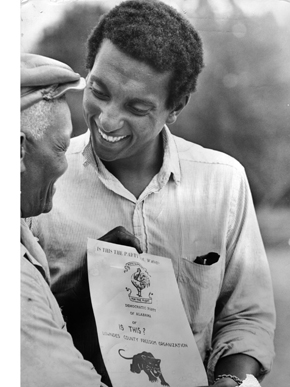 Stokely Carmichael, who originated the term “black power,” was born on June 29, 1941, in Port of Spain, Trinidad and Tobago. Carmichael dedicated his life to speaking around the country and writing essays on black nationalism, black separatism and pan-Africanism.

Carmichael’s parents immigrated to New York when he was a toddler and he was raised by his grandmother until the age of 11. He joined his parents in the United States and became a naturalized citizen at the age of 13. The Carmichael family moved to a predominantly Italian and Jewish neighborhood in the Bronx where he became fairly popular.

After passing the admissions test, Carmichael attended the prestigious Bronx High School of Science. Although he was well received by many of his peers, he was still conscious of the racial differences that separated him from his classmates. Carmichael continued on to Howard University where he studied philosophy and graduated with honors in 1964.

His activism began at Howard University during a critical time in the Civil Rights Movement. Carmichael began working with The Student Nonviolent Coordinating Committee (SNCC) for “Freedom Summer,” and soon he was appointed field organizer for Lowndes County, Alabama. In one year, Carmichael managed to raise the number of registered black voters and founded a political party, the Lowndes County Freedom Organization. He chose a black panther for the party’s logo and that later became the inspiration for the Black Panthers.

Despite initially leaning towards nonviolence, Carmichael grew tired of waiting for peaceful change. By the time he was elected national chairman of SNCC in 1966, he had lost faith in the theory of nonviolent resistance and was focusing on black power. The term was feared by many white Americans and it was considered to be controversial.

In 1967, Carmichael decided to travel outside of the United States to visit with revolutionary leaders in Cuba, North Vietnam, China and Guinea. Following his return from travel, Carmichael left SNCC to join the Black Panthers and became their prime minister.

Ture dedicated much of his efforts towards pan-African unity. He stated that “America does not belong to the blacks,” when explaining his reason for leaving the country. Ture continued to make trips to the United States to promote pan-Africanism and viewed it as the only way for the complete liberation of black people worldwide.

Kwame Ture was an effective organizer, activist and orator. He answered the phone by saying, “Ready for the revolution,” until his last day. Kwame Ture died of prostate cancer on November 15, 1998, at the age of 57.