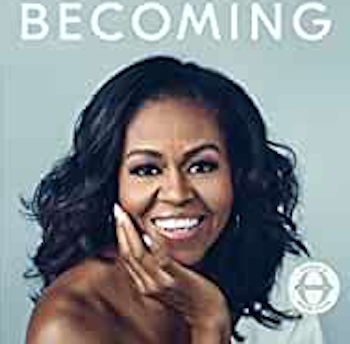 Lawyer, writer and wife of the 44th President of the United States, Michelle LaVaughn Robinson Obama was born January 17, 1964, in Chicago, Illinois. She was the first African-American First Lady of the United States and took on initiatives that focused on advocating for healthy families, service members and their families, higher education, and international adolescent girl’s education.

The Robinsons lived in a small home on the Southside of Chicago and always placed an emphasis on education. Mrs. Obama’s father worked as a pump operator for the Chicago Water Department despite suffering from multiple sclerosis and her mother stayed at home to take care of the children, Michelle and her older brother, Craig. Both of the Robinson children performed well in school, skipping the second grade, taking accelerated classes and attending top-tier universities.

After stepping back from practicing law, she began working in roles that allowed her to interact with people throughout the community. Mrs.Obama served as assistant commissioner of planning and development in Chicago’s City Hall, and the founding executive director of the Chicago chapter of Public Allies, an AmeriCorps program that prepares youth for public service. In 1996, she joined the University of Chicago as the Associate Dean of Student Services. She developed the university’s first community service program, and also served as Vice President of Community and External Affairs for the University of Chicago Medical Center.

On Oct. 3, 1992, she married Barack Obama. Michelle Obama helped his grassroots campaign operation, making speeches and appearances and talking with hundreds of potential voters. He was elected the 44th President of the United States.

Once in the White House, Mrs.Obama launched programs such as Let’s Move!, which brought together community leaders, educators, medical professionals, parents and others to address the challenge of childhood obesity; Joining Forces, a nationwide initiative calling all Americans to rally around service members; Reach Higher Initiative, an effort to inspire young people across America to take charge of their future by completing their education past high school; and Let Girls Learn, a U.S. government-wide initiative to help girls around the world go to school and stay in school.

After leaving the White House, she published her memoir, Becoming, in 2018. It became a New York Times bestseller.