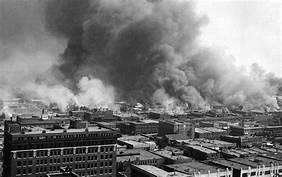 Greenwood Section of Tulsa, Oklahoma is Destroyed By a Racist Mob

It was known as the Tulsa Race Riot. But in actuality, it was two days of decimation of one of the most successful black communities in America’s history. It was a massacre. It was the destruction of Black Wall Street.

It was built on the vision of O.W. Gurley, who moved to Tulsa from Mississippi in the late 1890s on the heels of the Oklahoma Land run and purchased 40 acres earmarked for “coloreds only.” It wasn’t initially rich land. But Gurley set up his first business, a rooming house, and built several other residences, which he both rented and sold to people from the Global Majority moving to this area, fleeing the oppression of Mississippi.

The main road, where Gurley also later established other businesses, was called Greenwood Avenue, after a city in Mississippi.

J.B. Stradford arrived in Greenwood with a vision of black people working together, pooling their resources and building their own utopia. Like Gurley, he invested in real estate and built homes. He also owned The Stradford Hotel on Greenwood Avenue, which was lavish and was, at the time, the largest black-owned hotel in the United States.

Oil was discovered on the land once thought not valuable and the wealth of Greenwood turned it into Black Wall Street. The area was said to have more black doctors and lawyers than any other place in America. There were movie houses and restaurants, department stores and great schools. There were reports of several residents owning airplanes. Across America, Black Wall Street was known as the place of black wealth and success.

On May 30,1921, Dick Rowland, a young shoe shiner reportedly went to use a restroom in Drexel’s Building, one of the few restrooms that African-Americans could use. A white woman, Sarah Page, got on the elevator that Rowland occupied and according to sources creamed “rape!” and ran off. She claimed that Rowland “sexually assaulted” her without any sufficient evidence.

Rowland was arrested. A lynch mob planned to murder Rowland but residents of Greenwood, many of whom had just returned from World War I, came to protect Rowland. It was deemed an act of aggression that was met with an even larger mob. The mob grew more hostile and were allowed to unleash their anger and rage on the town of Greenwood. Many were deputized and given license to shoot black residents on site.

On May 31, the first air bombs were dropped on the city. Over the next two days, more than 35 blocks in Black Wall Street were destroyed, along with 1,200 homes and hundreds of black bodies murdered. More than 6,000 black people were held were imprisoned, according to the Tulsa Historical Society and Museum.

Eyewitness account of the massacre have been discovered and are now at the Smithsonian National Museum of African American History and Culture.