Did You Know The First Black Woman To Earn A Pilot’s License Was Born On This Day? 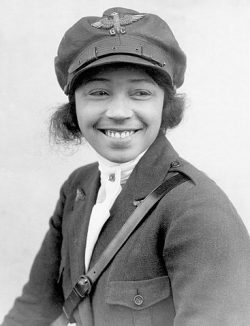 This Day In History: January 26th

During a time filled with much racial and gender discrimination, Bessie Coleman made history by becoming the world’s first black woman to earn a pilot’s license. She wowed the world with her high-flying abilities and is recognized as a pioneer for women in aviation.

Coleman was born on January 26, 1892, in Atlanta, Texas. Her parents were sharecroppers and had a total of 13 children. Coleman’s father left the family to pursue opportunities in Oklahoma which left her mother alone to support the children.

By 1915, Coleman moved to Chicago and worked as a manicurist while living with relatives. During her time in Chicago, Coleman discovered her interest in aviation after listening to and reading stories of World War I pilots. Her brothers shared their stories from which fueled her desire to become a pilot.

After making the decision to attend aviation school, she applied to many schools across the country but was rejected because she was an African-American woman. One of Coleman’s dream was to own a plane and open a flight school. Coleman was encouraged to move to France where women could fly airplanes, so she began learning French at night to achieve her goal. She moved to France and earned her license from the Caudron Brothers School of Aviation.

In 1922, she became the first African-American woman to make a public flight. She earned money by giving speeches and showing films of her air tricks. Her tricks included making the shape of an “8” or loops with the airplane. She also used her platform for activism by refusing to speak anywhere that was segregated.

The air tricks were quite impressive to audiences, but they were also dangerous for Coleman to perform. In 1923, she survived an airplane accident where she suffered a broken leg, cracked ribs, and cuts on her face. She made a full recovery and went back to performing her famed moves.

Despite the risks, Coleman wanted to be an example. However, she was killed in a tragic accident during a rehearsal for an upcoming show. Bessie Coleman flew her last airplane on April 30, 1926, and has been remembered as a trailblazer for both women and African-Americans.