Did You Know International Missionary Amanda Smith Was Born On This Day? 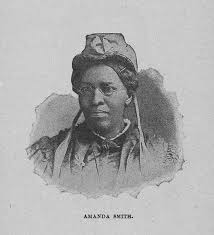 This Day In History: January 23rd

Amanda Berry Smith was a woman ahead of her time. Smith was born on January 23, 1837, in Long Green, Maryland. She became an international evangelist and missionary who opened an orphanage for African-American children.

The Berry’s were enslaved until her father saved enough money to buy freedom for himself and his family. As a teenager, she left home to work as a live-in domestic worker. Smith married her first husband, Calvin Devine, in 1854 and the couple had a daughter together. Devine enlisted in the Union Army during the Civil War and never returned home.

She married her second husband with the hopes of becoming a minister’s wife and pursuing church work through that venue. By 1869, Smith was balancing the loss of her second husband and the children they shared. She began preaching and singing at various events in the African-American church community and became well-known for her abilities. She decided to fully commit herself to evangelism after successfully preaching to an all-white audience at a holiness camp meeting in the summer of 1870.

Over the following eight years, Smith traveled worldwide as an evangelist and missionary. She headed for England in 1878 and spent a year preaching at holiness meetings. She then went to India from 1879 to 1881 and returned back to England. Smith left Europe to travel to West Africa and arrived in Liberia. She spent time in both Liberia and Sierra Leone performing missionary work.

By the 1890s Smith made her return to the United States after a final stint in England. Once she arrived back in the U.S, she preached along the east coast until moving to Chicago in 1892. One year later she published An Autobiography,The Story of the Lord’s Dealings with Mrs. Amanda Smith, the Colored Evangelist. She used her earnings from the book, donations, her savings and income from the newspaper she published to accomplish her goal of educating African American children.

In 1899, Smith opened the Amanda Smith Orphanage and Industrial Home for African-American orphans in Harvey, Illinois. The state of Illinois took over and chartered it as the Amanda Smith Industrial School for Girls after Smith retired to Florida in 1912. Smith died on February 24, 1915, and three years later her namesake school was destroyed by fire.